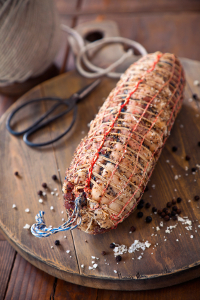 Casings and nettings are available today in more sizes, colors and shapes than ever before, which is a good thing for consumers and processors alike.

Now retail cases can stand out with summer sausage casings (a natural or artificial skin that holds a meat filling) shaped like a football or a beer bottle, or carry products in several different colors, notes Jon W. Frohling, president of the American Association of Meat Processors (AAMP), and owner of Frohling Meats, based in Hecla, S.D.

“This has allowed the small producer to really expand its retail selection without spending a lot of money,” he says. “Having all of these different sizes available to the small operator has allowed us to make the same meat block into many different and unique items.”

In addition, he notes that his company uses E-Z PEEL casing for its large diameter lunch meats, “which makes short work out of removing the casings and preparing the product to slice,” he says.

Brandon Meats & Sausage, for one, will be using two new types of casings soon: a casing with netting over it and collagen casing with a curve, according to John Benson, head of sausage kitchen, for the Brandon, Wis.-based processor and retailer.

The casing with netting over it is created by stapling one end of casing, running the ground product in and stapling the other end. “As the casing dries, the netting shrinks and gives it a pattern,” says Benson. “I’ve never seen it before, but was impressed with the sample I created.”

In addition, collagen cases which are traditionally straight (even though some stuffing has a curve to them) are now available with a curve.

“The new ones look like old fashioned wieners,” he says. “We’ll use them once our previous supply is done.”

Benson notes that collagen casings can still be tough, particularly for larger sizes, so any new products that offer a better snap or mouthfeel would help sell more sausages. Netting has also come a long way in the last few years for the smaller producer.

“You can get every size and pattern under the sun,” says Frohling, “which once again has helped us make unique products for our case, which separates us from the large companies.”

Some companies still net their product by hand — most likely as a matter of pride.

“I feel that you can do a better job netting product if you do each piece manually, and I feel you get a more consistent product,” he says. However, “the downside of the manual application is that it will take you a little longer, but I think people appreciate the personal touch,” says Frohling.

Benson notes that his company nets each ham by hand as a way to shape it to the company’s exact specifications.

Case-ready packaging tells a story to consumers, and about itself.

A new view of profit, with casings and nettings

Blades of glory: A little TLC goes a long way on slicers

Foodservice: Breakfast does a body good