The perennial sandwich favorite is experimenting with meaty, upscale and indulgent versions.

Americans just don’t get tired of burgers. The all-American sandwich is featured on most menus and is branching into meaty, upscale, indulgent versions as beef prices continue to decline.

“Ninety-nine percent of Americans say they love or like burgers, and 57 percent eat a burger at least once per week,” says Sarah Frick, brand manager at Cargill Protein Group, based in Wichita, Kan.

It’s hard to improve upon numbers like that. “Burgers are a menu classic — found on half of all menus,” says Claire Conaghan, senior account manager at Datassential, based in Chicago. “We don’t track demand, but restaurant offerings and this number have been steady for the past several years, hovering around 50 percent.”

But from a menu perspective, mentions of burger entrees are flat, despite being the most popular item on fast casual and fast food restaurant menus for lunch and dinner, says Lizzy Freier, managing editor at Technomic, a Winsight Company in Chicago.

“Burgers are the most preferred entree for both weekday (71 percent) and weekend (68 percent) lunch occasions, according to Technomic’s Lunch Consumer Trend Report,” she says.

Upscale, high-protein and more natural burgers are all trending, as well, Freier says.

Sauces are still a classic way to add interest to a burger. “Savory jams are a trend we are seeing overall and are growing particularly rapidly on burgers with bacon jam up more than 1,000 percent in the past four years and tomato jam up 325 percent,” Conaghan says.

All of these trends — meat, indulgence and sauces — combine to form an extreme, and often messy, burger.

“Extreme toppings also continue to trend whether that is mac and cheese or a mac and cheese patty [up 325 percent] or meat on meat as is the case for brisket [up 261 percent] over the past four years,” Conaghan notes.

“Arooga’s Grille House & Sports Bar recently launched a Brunch Burger, as did Jack in the Box in the past year,” she says.

Brunch burgers tend to feature eggs, just on top of the patty. “The trend to ‘put an egg on it’ continues to grow, though the focus is less on fried eggs as it was a few years ago and more on sunny side up eggs [up 479 percent] over the past four years,” says Conaghan.

To counter all that meat, burgers are being topped with more veggies or are even being made of vegetables.

“Veggie Grill has a VG Beyond Burger with a plant-based patty,” she says. “Hard Rock Cafe unveiled a cauliflower patty burger this past fall.”

Consumers are also increasingly interested in the story behind their food, so restaurants should share with diners where their burger came from and how it was prepared, according to Mintel’s burger report.

“Responsibly raised proteins and savory spreads had more than half of consumers interested in them” according to Datassential’s 2015 Burger Keynote, Conaghan says.

According to Frick, Cargill’s research points to the importance of quality markers, such as breed, grade and lean/fat ratio to consumers.

“However, this is simply table stakes today,” says Frick. “We know that consumers want to know as much about the food they are eating as possible. We are leveraging opportunities to communicate where they were raised, how they were raised and what they were fed whenever we can.”

Convenience is driving consumer purchase decisions at the meat case, particularly with Millennials and Generation X shoppers. These consumers are looking for different flavor profiles, often based on restaurant-style or trendy international dishes, Frick says.

“When asked about their cooking behavior, 68 percent agreed that cooking allows them to show their creativity, but 49 percent think it’s hard work,” Frick says. “Fifty-six percent often try to copy restaurant recipes at home, but 47 percent only have a few meals they know how to prepare.”

The data shows that this group of consumers wants to be on top of food trends, but they don’t have the experience to make that a reality, Frick says.

“This group is looking for convenient meal solutions that allow them to make restaurant-style dishes at home, and that bolster their foodie reputation among peers,” she says. “For the ground beef category, this means providing a bold, indulgent burger experience that can be created at home.”

“With this approach combined with declining beef prices, there will be more opportunity for retailers and foodservice operators to earn higher margins with ground beef and burgers,” says Frick.

Taste is key, whether the burger patty comes from a restaurant or the meat case.

Increased competition in the burger category at foodservice and retail is leading to innovative flavors, toppings and quality beef selection for consumers. As consumers from all backgrounds continue to appreciate a juicy burger, restaurants and retailers will need to continually innovate and promote their burger options to a willing audience. NP

Lamb burgers have increased penetration each year since 2005. 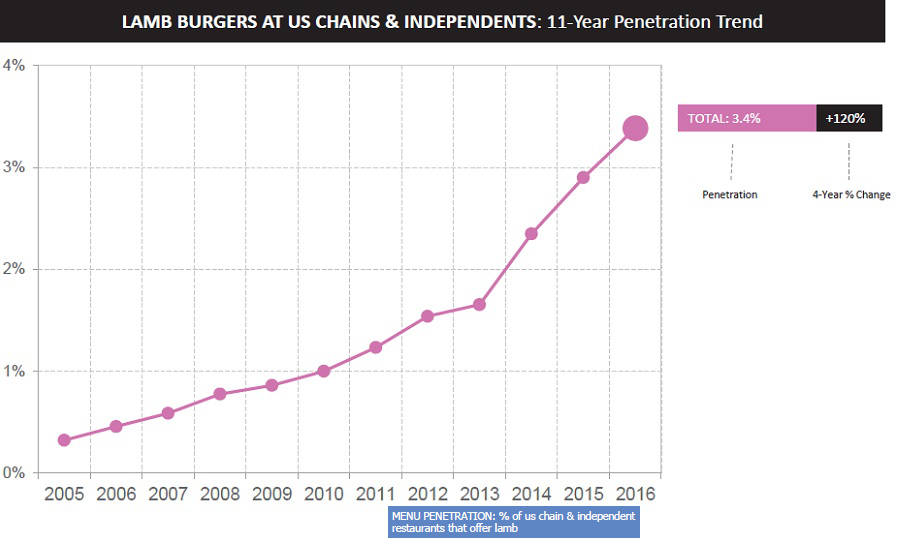 Are burgers going Greek? As consumers look for unique flavors and watch their diets, they are increasingly trying lamb burgers, which can have a Mediterranean vibe or not.

In the last four years, lamb burgers have appeared on 120 percent more U.S. chain and independent restaurant menus, according to Chicago-based Datassential MenuTrends.

“We are seeing more and more approachable handheld items with lamb appearing on menus,” says Megan Wortman, executive director of the American Lamb Board, based in Denver. “Topping the list are lamb burgers.”

“Retail sales of ground lamb are also increasing as consumers are bringing the unique flavor of lamb to backyard barbecues and more,” says Wortman. “Ground lamb represents a fabulous way for consumers to experiment with lamb.” NP