This website requires certain cookies to work and uses other cookies to help you have the best experience. By visiting this website, certain cookies have already been set, which you may delete and block. By closing this message or continuing to use our site, you agree to the use of cookies. Visit our updated privacy and cookie policy to learn more.
Home » 2021 Burger Report: A powerful push for plant based patties
Meat and Poultry ProcessingBurgersSpecial Reports
2021 Burger Report

Plant-based burger sales are booming, but will take flavor variety and lower prices to compete with beef.

Launches of new varieties and the expanding presence of products in supermarkets and foodservice outlets is resulting in greater consumer awareness, interest and purchasing activity. While non-animal proteins still account for less than 2 percent of meat department sales, revenues are set to rise as products become increasingly flavorful and affordable, analysts say.

How to Keep Burgers a Foodservice Favorite

A Powerful Push for Plant-based Patties

Helping to drive growth are consumers sampling plant-based burgers for the first time and those looking for fresh options, says Danny O’Malley, president and founder of Before the Butcher, a San Diego-based supplier of plant-based burgers.

“The majority of plant-based burger buyers also eat animal proteins but have concerns about their health, the environment and animal welfare, along with curiosity about the products,” he says, adding that the majority of buyers are females and people between the ages of 25 and 50.

Health worries drive the majority of those buys, with 73 percent of consumers citing health concerns, IRI says. Another 37 percent of people do so to help lessen the impact on the environment that occurs from developing animal proteins, according to Technomic Inc.’s 2019 Burger Consumer Trend Report. The Chicago-based food industry research and consulting firm also found 35 percent of consumers strongly agree it is important that the environment is not negatively impacted by the burgers they eat.

Despite growing interest, plant-based options are still far from being major competition for beef burgers, analysts say. But by marketing non-animal burgers, retailers are in better position to attract more younger consumers to the meat case, “which provides them with an excellent opportunity to convert the shoppers to other items while there,” says Anne-Marie Roerink, principal of 210 Analytics, a San Antonio-based market research and marketing strategies firm and preparer of the Power of Meat 2020 report. 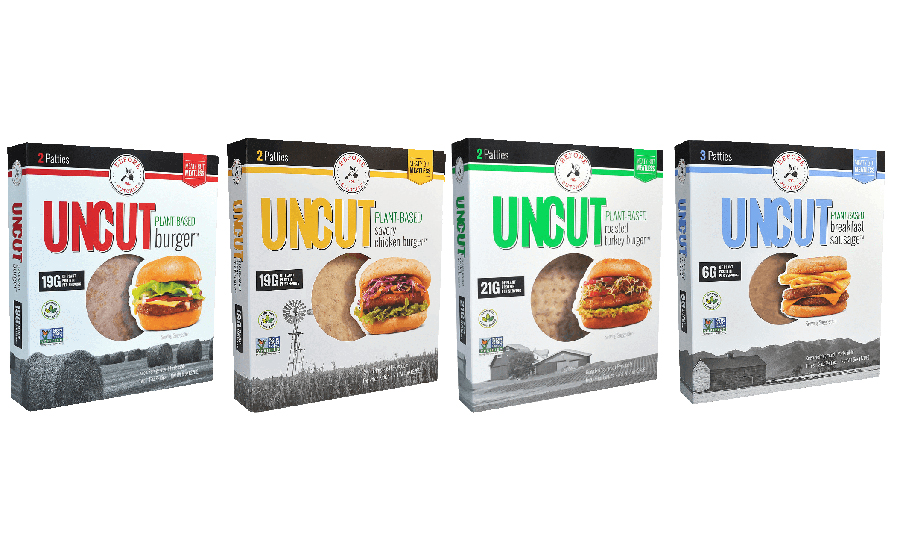 Courtesy of Before the Butcher Inc.

Keep the selections in the spotlight

A major merchandising challenge for retailers is making consumers aware of the presence of plant-based burgers in stores, particularly because product location often varies by outlet, O’Malley says. There also is a need to educate store employees about the products so they can intelligently discuss the selections with shoppers, he says.

“Natural-foods stores are much better at instructing workers than conventional grocery outlets because health is their major focus, and they understand the importance of having staffers with product knowledge,” O’Malley says. “The butchers in meat departments often don’t get it. Typically, the best you can expect is a meat department employee saying where to find the burgers, and even then, there may be confusion.”

Also affecting product marketing is the inability to let shoppers sample plant-based burgers in stores because of COVID-19 restrictions, O’Malley says. “Most consumers have heard of the items or understand what they are about,” he says. “But getting them to purchase or try the selections is a different story.”

Retailers can make shopping easier for consumers looking for alternatives to beef by situating plant-based burgers and grinds next to the ground chicken and turkey products as all three have more attractive health halos, Roerink says. “It also is important for retailers to understand the ideal assortment of burgers they should carry, particularly so they do not replace the better-selling items,” she says.

Because plant-based burger purchasers are generally more health conscious, the buyers typically select the burgers in lieu of their usual chicken meal, rather than taking sales from beef products, says Chris DuBois, IRI senior vice president of the protein practice.

“Taste and price are the top reasons why consumers purchase specific foods, but taste ranks lower for those who buy plant-based selections as more buyers are seeking the health halo that they believe exists,” he says. 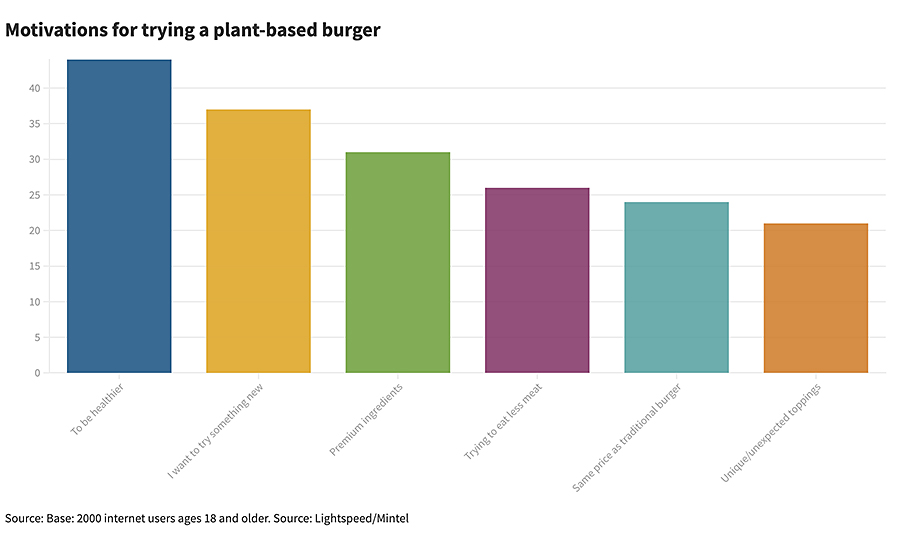 Stand apart from the crowd

Because the largest supermarkets tend to sell the most prominent branded plant-based burgers, smaller operators can differentiate their offerings by carrying selections from local and regional suppliers, along with wider varieties, O’Malley says. Retailers can effectively spotlight the products with shelf tags, signs and traditional advertising, he says.

Before the Butcher offers three types of fresh burgers under its premium Uncut brand: conventional, turkey and chicken, along with a breakfast sausage and six varieties of ground meats in 14-ounce packages.

Burgers in the supplier’s new frozen Mainstream line sell in 32-ounce packages that contain eight burgers instead of the traditional two-pack and have a suggested retail price of $10.99 for greater price parity with beef burgers, O’Malley says. He adds that production efficiencies and getting better pricing from its ingredient suppliers thanks to higher purchasing volumes enables Before the Butcher to lower its product prices.

An evolution is underway

Future plant-based burger lines will likely include more ethnic, regional and spicy varieties for both pre-made patties and grind packages, O’Malley says. Before the Butcher’s 14-ounce grind packs have a suggested retail price of $7.99.

“As interest in plant-based burgers increases, so too do product expectations,” says Emma Allmann, junior analyst for Mintel Group, a Chicago-based global market research firm, citing Mintel’s November 2020 Burger Trends: Including Impact of COVID-19 U.S. report. “When health and novelty remain leading drivers for plant-based burger trial, premium and unique toppings and ingredients also are influential. Innovating around the patty and toppings to provide consumers with exciting and flavorful meat-free burgers will help a restaurant stand out in a saturated market.”

The rate of sector growth also will be dependent on the degree of consumer interest in sustainability and their concerns about the impact that animal agriculture is having on global warming, says Jim Wisner, president of Wisner Marketing Group, a Lake Forest, Ill.-based retail consultancy. “Those factors are a big deal to a growing number of people,” he says.

2021 Burger Report: How to keep burgers a Foodservice Favorite