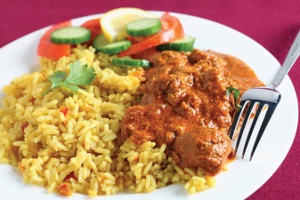 These items are also the starting point for developing unique custom product offerings for foodservice customers, as well as processed food products for the grocery and retail food segments.

“Consider Asian cuisine,” Cantor noted.  “There is endless debate over just how many culinary styles there are.  Each of them developed over the centuries as a result of many factors like geography, climate and the social history of the various regions.  China alone has at least four or five major styles of cuisine.”

“We’ve drawn inspiration from all sorts of ingredients and flavors that are traditional elements of Asian cuisine – ranging from ginger, onion and garlic to pungent chilies, vinegar and soy,” Cantor said.  “The end result is bold, new flavors that are sure to add zest to menu and prepared food offerings.  There’s nothing ‘routine’ about these flavors!”

“Latin cuisine is packed with flavor,” Cantor noted.  “It’s a veritable explosion of taste sensations ranging from basic to complex, derived from chilies of all types plus distinctive herbs like cilantro, various spices, and foods like onions, garlic, lemons and limes.”

Cantor points out a common misconception concerning Latin cuisine – that it is heavy and overly spiced.  “Those qualities may pertain to what is known as ‘Tex-Mex’ foods, but that’s not what we’re striving to achieve in our offerings,” he observed.

“Instead, we’re capturing the true depth of flavor that characterizes the cuisine of Latin America’s coastal regions as much as its interior deserts and mountains.  The taste is savory and earthy – but it’s also subtle flavors,” Cantor emphasized.

Rounding out the Ethnic Inspirations Collection is African Barbecue Marinade, a new offering that draws its distinctive qualities from the pungent culinary traditions of Sub-Saharan Africa.  It’s a surprisingly unique marinade that promises to be very popular.

According to Patrick Laughlin, Director of Marketing, the process by which Fuchs North America develops new seasonings, mixes and flavors in the Ethnic Inspirations Collection and its other products is both a science and an art.

“We’re continually focused on evolving consumer taste preferences, but we also experiment with many combinations of flavors,” Laughlin noted.  “We want to help our food manufacturing customers lead the way when it comes to new taste sensations – to be distinct, not just like everyone else,” he added.

Laughlin reported that Fuchs North America’s approach is to work with customers “to go from concept to manufacturing to delivery” of an approved flavor as quickly as possible.

“Because we have a wide range of flavor bases at-the-ready, we can provide samples for immediate testing.  Then we work with each customer to customize and refine the flavor to attain just the right taste characteristics they’re seeking,” Laughlin stated.

Laughlin reported that the development process from concepting to delivery can happen in a matter of a few weeks – or sometimes in just days.  “That kind of schedule is a huge benefit when customers are under tight product development timeframes.” he said.

For more information about Fuchs North America’s new Ethnic Inspirations Collection and to request complimentary samples, contact Patrick Laughlin, Director of Marketing, at 443-544-1228 or plaughlin@fuchsnorthamerica.com.  You may also visit www.fuchsna.com.