The 2017 Sausage Report: Thinking outside the bun

It’s in the eye of the beholder, really, what a simple sausage link represents: a flavorful, rich start to the day or a healthy, natural Paleo dinner.

Sausage benefits today as a platform for consumers’ desire for more protein, indulgence in moderation and strong flavors. It’s also seeing growth from an unlikely source — the clean-label, health crowd.

“Sausage is an incredibly diverse protein, widely featured across menu parts and day parts,” says Joe Garber, marketing coordinator, Datassential, based in Chicago. “Already one of the top breakfast proteins, sausage is currently finding increased menu growth in p.m. day parts — up 5 percent on dinner menus over the past four years.”

Sausage has certainly remained a steady presence on restaurant menus over the past four years.

“Sixty percent of restaurants offer at least one item that includes sausage,” says Garber. “The wealth of sausage varieties allows it to appeal to a wide range of current growth trends, like healthier menu offerings — turkey sausage, chicken sausage — seasonal limited-time offer appeal [such as bratwurst in October and smoked sausage in summer], unique protein offerings such as boar and venison, and more traditional/authentic ethnic fare — chorizo, merguez, bratwurst, kielbasa.”

At retail, the $7.7 billion sausage market is seeing moderate growth in the meat case.

“Dinner and breakfast sausages are up 1.4 percent in volume growth,” to 2.3 billion units, says Meagan Nelson, associate director of fresh growth and strategy at Nielsen, based in Chicago. “A lot of the growth is coming from other areas, such as natural, clean-label meat. We’re seeing consumers wanting the idea of cleaner labels, and the natural/organic halo helps.”

In fact, breakfast and dinner sausages made from vegetarian-fed hogs posted $8.7 million in sales, which translates to 131.9 percent volume growth, says Nelson, but is still a small area within the massive sausage category.

“One other issue taking the fore is the use of antibiotic-free meat,” says Chris Salm, founder of  Gilbert’s Craft Sausages, based in Wheaton, Ill. “We’re in the process of transitioning all of our chicken sausage to use meat raised with no antibiotics, and we’re seeing some other producers moving in this direction as well.” 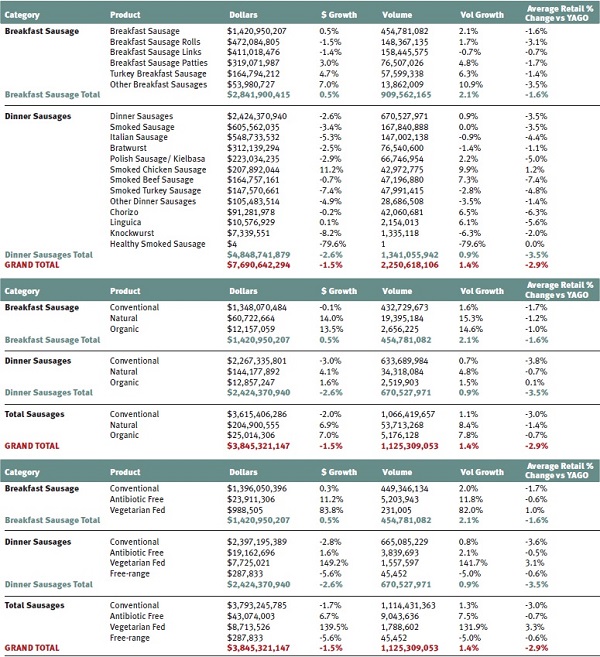 The increase in poultry sausages at foodservice appeals to consumers looking for a leaner option, Garber says.

“Specifying the kind of sausage protein used has become more frequent with pork sausage [up 49 percent over the past four years], turkey sausage [up 45 percent] and chicken sausage [up 29 percent] — all have grown on menus,” he says.

Consumers are looking for healthier, more versatile options that fit their nutrition goals and work with a wide array of dishes.

“We’re seeing a lot of people using our sausage as a complement to vegetables and greens,” says Salm. “It could be part of a Paleo-inspired diet, Weight Watchers or even a ‘flexitarian’ diet where people are more judicious about the meat they eat.”

People may want healthier food, but they also still want indulgence. They can find it in the side and starter categories.

“One of the trends from Technomic’s Center of the Plate: Beef & Pork Consumer Trend Report is meatier sides and starters,” says Lizzy Freier, managing editor of menu analysis at Technomic, based in Chicago. “About a third of consumers aged 18 to 34 say they would order side dishes made with pork if offered, including sausage. We expect more chains to add sausage to veggie sides.”

“We see the same trend with lunch/dinner pork dishes,” says Freier. “This menu action by operators may be a reflection of consumer preferences and concerns: Fewer consumers now than in 2014 say pork is healthier than beef. This may be due to the recent announcement regarding the correlation between cancer diagnosis and consumption of processed meats like sausage and bacon.”

At breakfast, menus are showcasing bolder dinner proteins and flavor profiles, such as Southern-influenced dishes such shrimp and grits featuring andouille sausage or a spicy chorizo hash, says Garber.

“Both andouille and chorizo are growing on breakfast menus,” he says.

“In the last two years, all-day breakfast has given sausage more reach than before,” says Patrick Fleming, director of market intelligence and innovation at the National Pork Board, based in Des Moines, Iowa.

Packing on the heat

For lunch or dinner, Italian sausage is declining slightly (down 5 percent), but a similar variety, fennel sausage, is growing (up 71 percent over the past four years), says Garber.

“More venues have called out house-made fennel sausage, a key ingredient for traditional Italian dishes,” he says. “Ethnic and regional U.S. varieties are also increasing with merguez [up 62 percent over the past four years], chorizo [up 17 percent] and andouille [up 9 percent].”

On dinner menus, diners are showing increased interest in pairing local food with unique proteins, which is leading to some notable sausage varieties, such as wild boar, venison, elk, duck, lamb or alligator, says Garber.

“The term ‘house-made sausage’ has increased by 100 percent over the past four years,” he says.

Charcuterie and salumi style proteins are also finding lots of growth, with charcuterie appearing on 98 percent more menus than four years ago, as appetizer/small plate offerings or sandwich proteins.

The tried and true classic bratwurst is up 35 percent at restaurants, says Garber.

It was inevitable, really, that sausage would also find its way onto burgers, just like its counterpart bacon. More and more, the versatile protein has been appearing as a burger topper — up 48 percent on burger menus the last four years — at major chains like Hard Rock Cafe, Houlihan’s, RAM Restaurant and Brewery and Old Chicago for a limited time.

At retail, growth in sausages including bratwurst (up 2.8 percent in pounds), breakfast sausages (up 2.3 percent) and smoked handheld varieties (up 1.6 percent) is driven by flavor and convenience, Fleming says.

“Limited-time offers drive sales for products like bratwurst, such as Johnsonville’s Buffalo Bleu and Firecracker flavors,” says Fleming. “Some new flavors stick and others are transient.”

In general, sausage is offered in a number of unique and multicultural blends and with more cheese blends. “Sausage is offering more specific flavors, such as habanero, than just ‘spicy’ or Mexican,” says Nelson. “Global flavors are becoming mainstream so sausages are drawing on these multicultural flavors as well.”

“The Jack Link’s A.M. products are designed to take advantage of that crucial breakfast daypart, but also jump on the growing snacking occasion — which in C-stores now accounts for 50 percent of all eating occasions,” says Lewis. “In terms of flavor, these breakfast products are pretty standard; we’re seeing brown sugar and maple flavorings, as well as applesauce, sage, etc.”

Sausage is not just for grilling, but also provides a flavorful counterpart to pastas and vegetables and as a high-protein snack.

“We’re so used to thinking of sausage as it relates to a bun and condiments, but we’re focusing our development on using sausage as an ingredient in dishes,” says Salm. “For example, we collaborated with Tessemae’s on a recipe using our Caprese Chicken Sausage on a bed of spaghetti squash with broccoli, parmesan and their Italian dressing.”

The meat department should own the increasingly popular high-protein message at retail, but surprisingly doesn’t.

“All meat products have an opportunity to tout their own protein story,” says Nelson. “All of the other departments are telling it. Products with protein claims on their packaging do better, like frozen pizza or even Baby Ruth bars.”

Meat processors have their work cut out for them, it seems, as just last year Nielsen released a study showing about half of consumers don’t think of beef, chicken or pork as high-protein products, according to the “High on Protein” report.

“People know they need protein, but they don’t always know what that means,” says Nelson. NP

The 2014 Sausage Report: Health vs. indulgence