Brats, baseball, cookouts — basically the ingredients of summer. While sausage remains popular, more consumers say it has too much fat and too many calories. What’s saving it? Reasonable prices, ethnic flavors and poultry sources.

“Sausage is a staple in almost every culture,” says Jason Menke, director of marketing communications at National Pork Board, in Des Moines, Iowa. “Consumer affinity remains high because of its flavor and versatility.”

Hitting it out of the park

Do baseball fans prefer hot dogs or sausages at Major League Baseball games? Hot dogs seem to be the clear winner. The Washington, D.C.-based National Hot Dog and Sausage Council (NHDSC) estimates fans will eat more than 19 million hot dogs vs. 4.6 million sausages during the 2018 season. This quantity combined would stretch across the U.S. from Seattle to Atlanta.

Once again, Milwaukee Brewers fans are the only ticket-holders expected to eat more sausages than hot dogs.

Some rookie flavors are the Pirates’ Pittsburgh Paella, a housemade kielbasa and traditional pierogis; the Tigers’ An Ode to Detroit Dog, a natural-casing hot dog smothered in brisket chili and drizzled with habanero queso sauce; and the Rockies’ Triple Play Dog, a hot dog topped with Carolina-style pulled pork, crumbled bacon bits and purple slaw.

“Breakfast sausage is ubiquitous,” says Menke. “It’s right up there with bacon, although it would be hard pressed to beat bacon’s popularity. Smoked sausage, in contrast, has moved to the center of the plate and to dinnertime.”

After all, 73 percent of people love or like sausage with more than a third of people (36 percent) loving it, says Claire Conaghan, syndicated group manager, Datassential, based in Chicago.

“It is, of course, essential at breakfast — 73 percent of breakfast menus include sausage, but it offers versatility beyond breakfast,” Conaghan says. “In the summer, in particular, the convenience of sausage comes to mind; few proteins are better suited to handheld applications (corn dogs, hot dogs, Italian sausage, etc. …).”

“It continues to be a dish or menu item that is really popular and can be utilized on menus,” he says. “Chefs have the ability to play and experiment with its flavors — they can use sausage to introduce new flavor opportunities. Also, consumers feel confident when cooking it; whether it’s brats, smoked sausage or breakfast sausage, it’s easy to prepare.”

Current flavors reflect the Hispanic influence in food culture, such as rosin and chorizo. “I’m anticipating with the predicted population growth of Hispanics in the U.S. we won’t see a decrease in this influence any time soon,” Menke says.

According to Chicago-based Mintel’s Hot Dogs and Sausages — US, October 2017 report, consumers who don’t buy hot dogs or sausages cite health concerns as the top reason. Even people who buy sausages worry about their meat quality (one-third) and say they are unhealthy (one-third). This may be due to headline-grabbing stories highlighting studies that claim to prove processed meats are a carcinogen. So, products that don’t have nitrates or nitrites have a better chance of appealing to consumers who want better-for-you or premium products, Mintel notes. 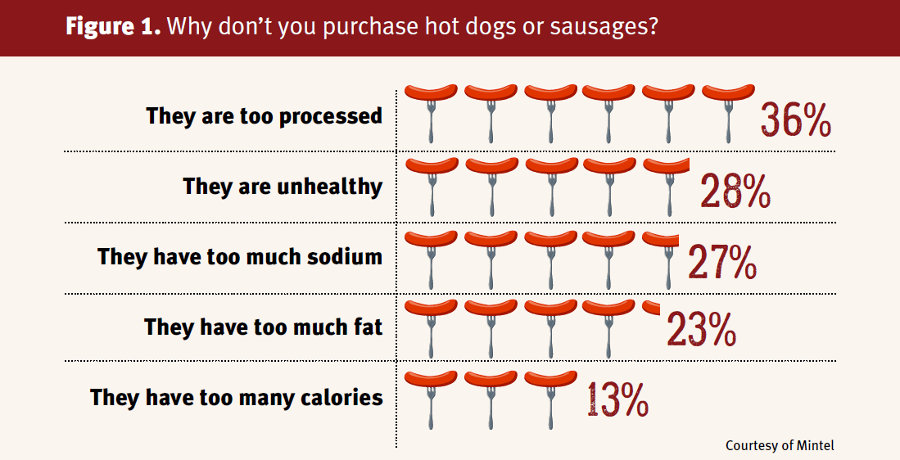 Sausages made with poultry carry a health halo, and “nearly a quarter of hot dog and sausage buyers agree that poultry options are better for you than red meat options,” Mintel reports.

Premium and healthy sausages have an advantage over other products now, with more than 25 percent of consumers surveyed saying premium offerings are worth extra money, according to Mintel. “Innovation in unique or bold flavors will likely appeal to the 28 percent of consumers that like to try new flavors,” the report shows.

“In the past decade, sausage sales have definitely increased for both direct to food service and restaurants, as well as markets and butcher shops who are now making their own sausage,” says Ryan Farr, owner of 4505 Meats, based in San Francisco, Calif. “With a resurgence in the Artisan Butcher Movement, people want to know a lot more about where their products are coming from which is driving the makers and retailers to utilize whole animals and better quality meat.”

In general, the beef and pork industries have experienced price volatility, leading to a 5 percent sales decline from 2015 to 2017, Mintel reports. “A dramatic drop across meat categories may have caused a shift in consumer spending to higher quality, unprocessed, and albeit temporary, more affordable meats shifting attention away from hot dogs and sausages.” the company reports.

So what’s on the menu?

The basics still work. “Consumers are more interested in clean meat, clean sausage and something that simply tastes like what it says it is,” Farr says. “More than ever, people are interested in and open to more interesting flavors, even though people still love a good Bratwurst or Spicy Italian.”

Menus are showcasing unique sausage flavors, as well. Fennel sausage, for one, is up more than 46 percent on menus over the past four years. “Fennel, of course, is a key ingredient in Italian sausage, but is rarely emphasized as the flavor,” Conaghan says.

Sausage from global cuisines, such as linguica which has even been featured on pizzas from large chains such as Papa John’s, are becoming more prominent. “New ingredients from well-known cuisines are gaining recognition — think of Chinese cuisine and increased usage of the dried cured sausage lap cheong (up more than 39 percent over the past four years),” says Conaghan.

Ethnic and bulk sausages are popular together. “These are all encased sausages, but bulk sausage varieties can also be growing, such as the continued growth of chorizo (most often the fresh raw sausage from Mexican cuisine) now found on 17 percent of menus and up more than 16 percent over the past four years,” Conaghan says.

Alternative proteins are also growing, with chicken sausage up more than 26 percent over the past four years, Conaghan says.

“Poultry sausage is a big opportunity,” Freier says. “Turkey sausage mentions at breakfast are up 12 percent in the past two years, and 29 percent of consumers say they’d order a breakfast sandwich or burrito with turkey sausage in it.”

Despite sausage’s perceived health issues, it can still appeal to consumers through premium, free-from claims, ingredient integrity and flavor, according to Mintel’s report. In addition, sausage still offers nostalgia, ease and convenience, taste and fits in at several occasions, which is why it remains popular.  NP

The 2017 Sausage Report: Thinking outside the bun

The 2014 Sausage Report: Health vs. indulgence