Jack Link's Protein Snacks believes meat to be seriously underappreciated by consumers as a healthy option for protein and performance, and it plans to shake up the snack category with a major increase in household penetration for meat snacks.

Minong, Wis.- based Jack Link’s Protein Snacks has been no stranger to success. Having spent the last several decades building what some would consider the quintessential meat snacks brand (complete with Sasquatch spokesbeast) in Jack Link’s, the team has not become less aggressive. One might think all was satisfactory for the company, which could maintain course and do quite well with such a dominant brand in the meat snacks category.
Yet, that has been far from the truth for the Minong, Wis.-based Jack Link’s team, which has spent the last several years shifting its marketing priorities, placing an emphasis on category expansion.

“Our marketing will continue to get better, and we believe in it — we know we have to be the voice to the consumer and drive household category penetration,” says Troy Link, president and CEO of Jack Link’s Protein Snacks. “We know we need to be the innovator and that we’re in charge of growing this category.” 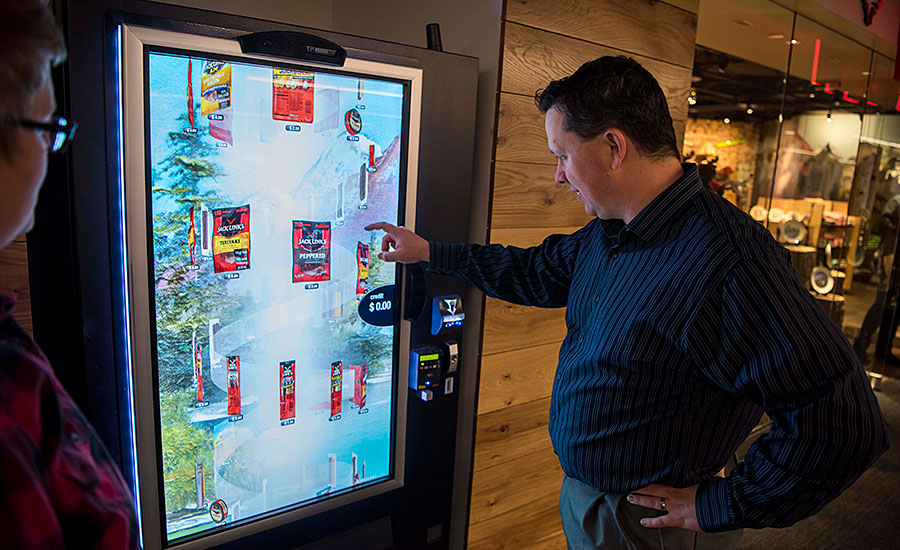 With brand awareness as the focal point of marketing for much of the last decade-plus, anchored by the wildly popular “Messin’ with Sasquatch” and “Feed Your Wild Side” themes, Jack Link’s has grown rapidly. Those campaigns have created a mostly unrivalled brand image with consumers among meat brands.

Jack Link’s is not abandoning its desire to stoke and promote the almost-cult following of its brand, to be sure. In fact, the opening of a corporate innovation center in early 2018 and the recent opening of its retail store (see photos throughout story), prove that consumers remain at the heart of what the company creates. 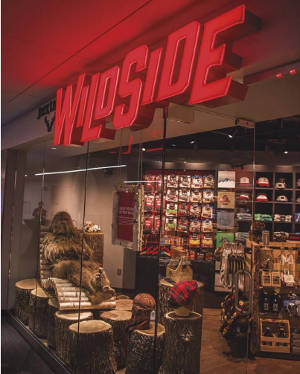 Sasquatch occasionally drops by Wild Side to visit with customers — or simply relax, depending on the items available in the store that day.

Yet, the changing snack food market landscape and Link’s vision for the company in light of it, has brought about this tweak in overall marketing strategies over the last few years.

“Troy wanted to transition from being a beef-jerky company to a protein-snack company,” explains T.D. Dixon, chief marketing officer. “Chips, pretzels, cookies and crackers, they all have 99 percent household penetration — everybody has a cracker, cookie or potato chip in their cupboard — but jerky as a healthy, everyday snack, has only a 49 percent penetration.”

“Our goal is to convince people why participating in the meat snack space is better than participating with cookies, crackers, chips, Greek yogurt, nuts and seeds — particularly around protein,” he says. “The protein potency of meat, coupled with the fact that it’s not high in sugar, fat or cholesterol like some of those other snacks, makes it a really great protein snack.” 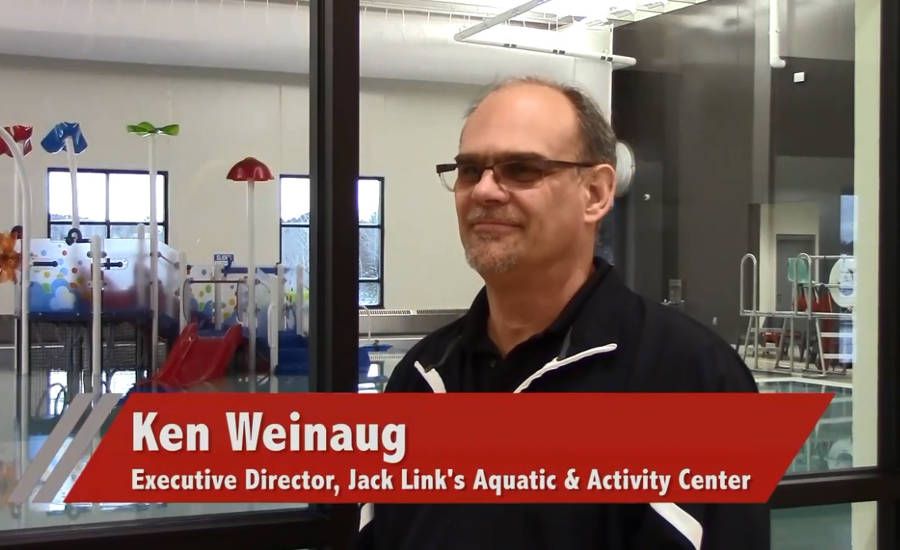 The straightforward message of meat as the ultimate protein will resonate, Link says, particularly with consumers who are concerned with health and wellness.

“We know people are concerned about the food they’re putting into their bodies, how their bodies function with that and for how long,” he explains. “When we really talk about what a complete protein does, and how enzymes in your body are designed to utilize that versus whey protein or protein enhancers, the message comes across to them pretty easily.”

Jack Link’s already has made inroads in the performance/athletics world, having developed partnerships with athletic teams at the university and professional level across the nation. The partnership with the University of Wisconsin-Madison Athletic Department, for example, makes Jack Link’s the school’s official protein partner. Jack Link’s then created “protein performance centers” in all the athletic facilities, and its jerky is recommended by team dietitians as a protein recovery and rebuilding tool.

“We want to be about performance — as a good, healthy snack, there are a lot of physiological benefits to eating meat,” Dixon says, “So you’ve got recovery and rebuilding, and ‘fuller, longer,’ [where] the more satiated you are, the more energy you have to perform longer.” 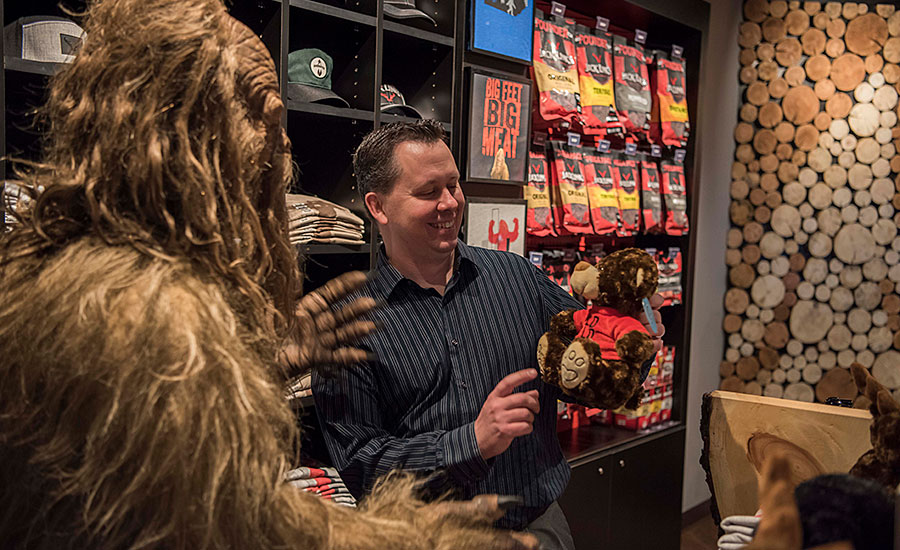 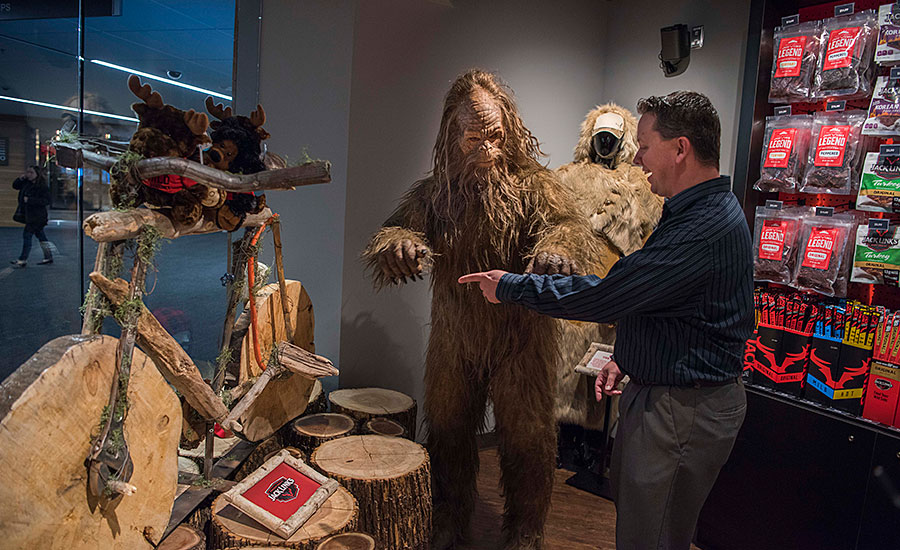 Hanacek gets a personal tour of the Wild Side store from Sasquatch, who shows him some of his favorite Jack Link's items for sale.

Jack Link’s believes this strategic shift, whereby more people are educated about meat and its ability to be a healthy option as a snack, will drive category penetration, which will allow it to grow substantially in the next several years.

Dixon says the company wants to drive the popularity of meat snacks to the point that it grabs 20 points of household snack penetration in the next two years. Link knows the investment is significant, but also realizes that Jack Link’s would be the biggest benefactor of any increase.

“With our strong market share, if we drive three consumers to the category, we’re going to get at least one and a half or probably two of them,” he explains. The goal is aggressive, Dixon says, but it represents just the start. 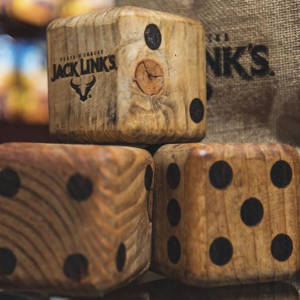 “That [20-point increase in household penetration is] still not anywhere close to nuts and seeds at 85 percent, or chips and pretzels at 95, but we think it’s a huge step,” he says. “We’ve got some ‘hooks and bullets’ [traditional fishermen and hunters] consumers up north, but go down the coasts, and we have huge opportunities.

“We’re building models now on how to become relevant to those folks, creating different occasions and scenarios for jerky to fit in their lives,” Dixon adds. Link believes that the aggressive nature of the Jack Link’s team will lead to the organization nearly doubling in size in the next five years via expansion of the brand into other categories (such as bars, refrigerated, pork rinds, Link says).

“We attract the best entrepreneurial spirits who want to grow, challenge themselves and make great decisions, and this company is going to grow as fast as the team wants it to grow,” Link concludes. “We’ve got strong market share, a great position and a great journey ahead. I wake up every day and feel like I’m just getting started.” NP 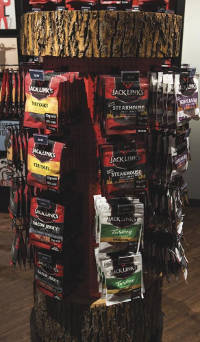 In November 2017, Jack Link’s Wild Side retail store opened along downtown Minneapolis’ Skyway — an eight-mile-long indoor system of second-floor bridges that connects 80 city blocks of office buildings and entertainment complexes, including Jack Link’s new headquarters and Target Center, where the National Basketball Association’s Timberwolves play. The store, in fact, is located next door to Target Center, and “around the corner” from the new headquarters for Jack Link’s Protein Snacks.

The concept maintains the consumer connections the Jack Link’s brand has built over the last decade, and Sarah Thill, retail store manager for Wild Side, has seen people’s eyes light up when they walk in the door.

“We have a really loyal and devoted fan base, and we really wanted to create something that paid homage to them,” she says. “We like to think of this as their clubhouse, where they can come and have a little bit of everything they love about the brand.”

Troy Link, president and CEO of Jack Link’s Protein Snacks, says Jack Link’s Wild Side will help fans get further immersed in the brand beyond the meat snacks they purchase, by offering all sorts of wearable and giftable products.

“Our main purpose was to take people to a memory or situation that was fun in their lives, at which point we hope a Jack Link’s snack was a part of that experience, and for them to visit our store,” he says. The store lets us extend that memory into a gift for someone else and a cool shopping experience for them.”

During The National Provisioner’s visit to the store in December 2017, Thill recounted that the most popular item in the first month or so of operation had been the Sasquatch ski masks. To that point, she said, an average of 200 visitors came through the store per day, with more than twice that traffic on game nights for the Timberwolves.

2014 Processor of the Year: Link Snacks Inc. is runnin' wild