Lower Foods' growth and expansion is designed to help the company remain a successful family-owned business.

At the age of 14, Alan Lower had to make a decision that no young teenager should have to make. His father had suffered a serious heart attack a couple of years before, and he had started working in the family’s custom processing business. Potential buyers had shown up to, as they claimed, acquire the Lower’s business. While most kids are planning for high school, Lower was asked to plan out his future.

“He wanted me to decide if I was interested in continuing in the business; I think he was tempted to give up,” Lower says. “He stayed in the business because I wanted to. Everyone thought he was crazy, that he should just sell out and go fishing, but he fought to the bitter end.”

The gamble has paid off. Lower Family Foods has remained a family tradition for four generations and more than 90 years of operation. The company was ahead of its time when it started producing some of the higher end deli meats and meal kits many years ago. Now, as a deli meat and cooked meat specialist, it is still working hard to be not only a top meat supplier and a good neighbor to its Richmond, Utah community.

Alan Lower’s involvement in the business dates back to the very start. He jokes that he was born in December of 1959 during a very busy time of the year.

“They didn’t have time to have me, but I was born, so they brought me back here and set me in the corner,” he jokes. “My mother had to go back and wrap meat, and I’ve been here ever since.”

Since it transitioned away from custom processing and focused solely on pre-cooked meats in 1994, Lower Foods has prided itself on its quality craftsmanship. Its production processes are not designed only on maximizing yield and profit; rather, the quality of the finished product comes first. Lower Foods utilizes open oven roasting in its cooking process because of the quality attributes.

“A lot of the companies we compete against may be cooking in bags or cooking in water. We’re cooking open on racks, so that allows for a surface drying process during the cooking. More moisture is cooked off, and that gives you a better mouth feel,” explains Mike Mortensen, plant manager. “When you open a package of our product that would typically go out to a deli, you won’t see a lot of purge.” 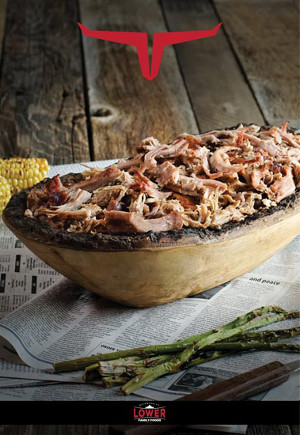 Lower Foods offers a variety of deli meats — including hams, turkey, roast beef, corned beef, pastrami and other cooked items like brisket, ribs, pulled pork, Hispanic menu items and many more. The products are available under many private label brands that are distributed across the country and available under the Lower Foods Double L Ranch brand. Lower Foods is a proud producer of Certified Angus Beef Brand products as well and offers a line of CAB products such as deli meats, prime rib, pot roast and CAB smoked items.

“They’re smarter, more educated consumers today, and they care about what they feed their families. Parents who are busy want to be able to use processed meats to help speed up dinner, but they want confidence in what they are serving their family,” she explains.

Lower Foods is used to being ahead of the curve on its product lines, but it had to wait before it could bring the Nature’s Craft line to the products for a very practical reason — there weren’t enough raw materials to go around.

“When we started looking at the all-natural line, there weren’t enough pork, poultry, and beef available that were from birth, never-ever. There were some withdrawal programs, but nothing from birth, but now we can get the supply that we need to have the hormone-free, antibiotic-free from birth claims on that line,” Boilesen adds.

Along with seeking out never-ever raw materials, Lower Foods has also worked to eliminate any allergens from its products. The company’s Richmond facility is certified allergen free, gluten-free and MSG-free as well. Mortensen and Lee Lower, who along with his brother Chad are the fourth generation of the family in Lower Foods, have been responsible for updating the family recipes. The company has moved away from off-the-shelf spice blends, as some of those formulations have extraneous ingredients. Employees mix the blends in-house using only fresh spices and seasonings in order to control the quality. It’s an extra step and an added cost, but one that has brought dividends for the quality of the end product.

“As we’re learning and evolving, I think our quality has gotten better,” Lee says, and Mortensen concurs.

“People have come to rely on those [ingredients] as a crutch, and they put them in their products to hold yields and produce less expensive products, to be able to retain moisture. We went away from those ingredients and rely on utilizing the proper processing techniques and doing things the way they were done in the past,” he says.

The business that Alan Lower’s grandfather had started was located in Smithfield, Utah. The custom slaughtering business eventually grew large enough to have a state-inspected facility, which allowed the company to survive but prevented it from growing further. The building couldn’t gain federal inspection, because the kill rail was about 6 inches too close to the floor. State inspection prevented it from shipping to the rest of the Rocky Mountain region, so the family was forced to find a new plant. They settled in Richmond in a 28,000-square-foot building in 1987, working to transition from a packer to a further processor.

“This [custom slaughter] business supported our pre-cooked meat business, and we ran both of those until we became profitable,” Lower says, adding that Lower Foods sold the custom processing plant and became solely a meat processor in 1994.

Lower Foods’ complex today is roughly 10 times the size of its original property in Richmond, and it has plenty of room to grow. The Lower family owns more than 150 acres of land around the plant on both sides of the highway. The company is ideally situated when it comes to its physical location.

“We have the end of the sewer pipe and the end of the water pipe, so the town’s not going to get past us,” Lower says. “That’s a big problem, the town grows around the meat plant, and the plant gets squeezed out. We’ve tried to position ourselves to survive.”

With ample room to expand, Lower Foods has ambitious plans in the works. A recent expansion includes modern test kitchen and sales training facilities as well as a lounge for truckers in the new distribution center.  Lower Foods has its own water treatment plant across the highway where fats are separated from the processing water. The clean water is used to water the plant’s landscaping as well as nearby corn crops. This summer, the company will be building a water storage tank filled from their own water source to take the load off the city’s water supply and become more independent.

“I don’t know if we started off to be a green company, but we’ve ended up that way, because it was the smart thing to do,” Boilesen says. “Alan knows that to make it, we have to control everything that we possibly can: Our water treatment, our water source, having plenty of space around us, being as independent as we can.” 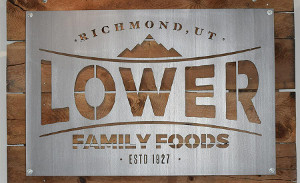 For its retail and foodservice partners, Lower Foods stands as an alternative to the large deli corporations, providing high quality and customer service at a competitive price. Its growth in recent years comes at a time when deli counters are showing a renewed interest in quality product over only price.

“You’ll see more whole muscle products out there, when 20 years ago you would see more sectioned and formed products, things that at least gave the perception of being less expensive,” Mortensen says. “I feel like at least in our part of the world, we were a big part of that, by offering whole muscle, better-quality products.”

The trend toward more quality deli meats has carried over to the foodservice market as well. One of the company’s customers, Even Stevens, is a deli sandwich chain that started in Utah but has expanded throughout the Western United States. Even Stevens caters toward Millennial customers, offering not only turkey, roast beef and brisket but also jackfruit and salads. Lower Foods’ deli meats, with their health attributes and never-ever claims, resonate with this customer base, and so does the story of the Lower family.

“We’re a small, independent family-owned company, and that’s the story they tell their consumers, and their consumers love that,” says Chad Lower, who is part of the sales team. “Their customers feel better about it, because they know there are people behind the product; it’s not just a big skyscraper.”

Lower Foods’ large and small customers alike appreciate the company’s customer service and response times. The key employees are free to make snap decisions and respond to requests without having to seek permission or consultation with a board of directors.

“It takes a lot of talents to do what we do. My dad trusts us to all explore our own talents. He doesn’t have us under his thumb,” Lee says.

The family atmosphere extends beyond Alan Lower and his sons. More than 200 people work for Lower Foods, and they are treated as part of the family as well. The company celebrates holidays together, and Lower has invested in two medical clinics in nearby Logan so that employees can receive medical care when they need it.

“We’ve been blessed here that we have grown and prospered, and I think that’s because of how we treat everyone who works here,” Lee says. “It hasn’t just been our family; it’s all of the other people working here every day that has made it possible. We try to give back and bless everyone who helps every day.”

“It’s a huge responsibility, because when you’re making decisions, it’s not just about the bottom line, it’s about the people who work here and their families,” adds Mortensen. He is one of several employees who have brought their children to work in the business as well.

“Our next generation isn’t just me and my brother. It’s all of the key team members whose children have also joined the Lower foods team, and they thankfully have had enough faith in our family to know that there will be job stability for the next generation as well,” Lee says.

The investments that Lower Foods has made and are making today are designed to pay off in the long term. Just as his father prepared the business for his son and for future consumer needs, Alan Lower has worked to make it a good neighbor, a good employer, an innovative product developer and a top-quality processor.