Lunch on the run: Lunch is changing because lunch eaters continue to change.

“Consumers are looking for something different and easier to get,” says Mark DiPomenico, customer solutions at Datassential, based in Chicago. “The means by which they get can food are increasing. So this change is definitely hurting a company like Subway, which has seen same-store sales decrease.”

Lunch options aren’t necessarily facing competition from all-day grazing or snacking, but the meal itself is. “Consumers break up their day with snacks, but I don’t think lunch sales are suffering from that,” DiPomenico says. “But how do you keep lunch choices relevant? Grab- and-go and hot lunches at retail are offering stiff competition.”

Plant-based alternatives are encroaching on traditional menus, too. “Consumers aren’t turning vegan, but are looking for vegan options,” DiPomenico says. “Mediterranean cuisine, such as hummus and vegetables on a sandwich, is a popular choice.”

“As far as health goes, of those proteins listed above, poultry benefits the most from positive health perceptions,” says Lizzy Freier, managing editor of menu analysis at Technomic, based in Chicago. “Seventy-eight percent of consumers think chicken and turkey are healthy or very healthy. Leading poultry health claims are fresh, real and clean,” according to Technomic’s 2019 Center of the Plate: Poultry Consumer Trend Report.

Sustainable seafood is also appealing to a variety of customers, according to the International Dairy Deli Bakery Association’s (IDDBA’s) 2019 What’s in Store report. It offers a great opportunity to market seafood’s story, curation and sourcing.

New lunch options are all about flavor — and international flavors. The What’s in Store report points to flavor-forward food as a popular trend with younger shoppers. The deli case can offer new, ethnic dishes in smaller, approachable portions for shoppers.

Lunch on the go

At the end of the day, sandwiches are still key drivers for lunch and aren’t going anywhere. “Sandwiches are easy, fast, portable and can be quite high quality,” says DiPomenico. “Panera, for example, isn’t going to give up their sandwich menu. They will remain important going forward.”

Convenience and portability are always important ingredients. “If consumers are eating at their desk, convenience is a plus,” DiPomenico says. “Or if they are on the go, their lunch has to be a handheld option. The deli is the ideal place to offer this type of lunch.”

Moreover, consumers can customize every part of their sandwich order today — at restaurants or the deli counter. “The sauces, cheeses and bread choices that build sandwiches, for example, are extremely important to complement the protein,” says DiPomenico. “The grocery and foodservice segments don’t always think of their bread carrier, but there are so many options like ciabatta and pretzel rolls.”

Pret A Manger sells high-end grab-and-go options with high-quality ingredients. “The chain makes their wraps and burritos in house. It offers hot and cold items with a push toward high-quality, non-GMO ingredients made fresh that day,” DiPomenico says.

In general, overall deli sales have increased. “It’s one of the better performing fresh departments at retail,” says Eric Richard, education coordinator at IDDBA, based in Madison, Wis. “Delis include a wide variety of items today. Plus, eating more protein is on everyone’s list.” 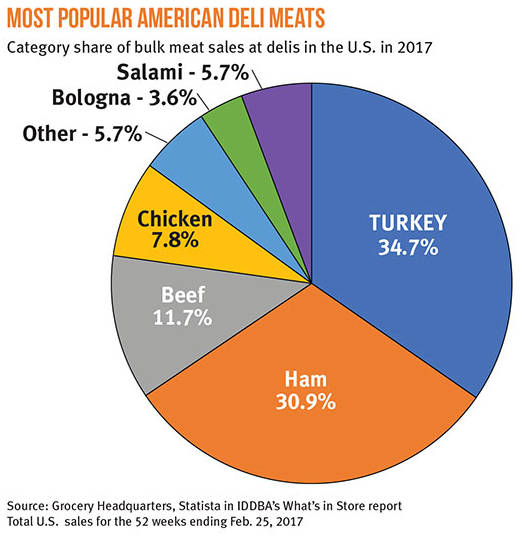 IDDBA’s research showed people want clean labeling so they are informed about what they are eating. “They really focus on product attributes — health and wellness factors into their buying decisions,” Richard says. “They also want protein attributes and larger options instead of snacks.”

Clean labels can also state the obvious such as “lunch choice” or “lunch, protein, filling,” so shoppers are more compelled to purchase these lunch options.

“Some deli meats like turkey convey that they are a healthy option by appearance,” Richard says. “Why buy it? It’s fat free and low sodium.”

The “free from” trend also remains huge, he notes, along with high protein and local sourcing.

“Processors should promote where the product came from, if it’s local and its process — what ingredients it does and does not contain,” Richard says. “Tell the story behind the product. Its story goes hand in hand with its attributes, because this information is just as important as the meat — how the animal was raised, what it ate, where it’s from.”

Freshness will always be a factor. “What gives deli an advantage over other areas?” says Richard. “Whether the meat is pre-packaged, sliced or behind the counter, its coloring and using a minimum amount of preservatives will make it more appealing to consumers.”

Fifty-eight percent of shoppers are loyal to their primary store for foodservice items. But younger consumers also want a more authentic, special experience and are adventurous.

Are fans of chicken nuggets switching over to chicken strips? Chicken strips at restaurants and foodservice outlets improved 16 percent while nuggets decreased 3 percent during the same time period, reported The NPD Group, based in Port Washington, N.Y. While something is afoot, it’s not nugget fans’ loyalty.

Apparently, chicken strip eaters are not the same as chicken nugget buyers. So, according to NPD’s Checkout service, which tracks the same buyers, former nugget buyers did not switch over to strips. Chicken strips and nuggets simply appeal to different buyers. In fact, chicken strips may be attracting new buyers with their product innovation at quick service restaurants and fast casual concepts.

The good news for nuggets is that even with declining sales, consumers ordered 2.3 billion nuggets in the year ending September 2018, compared with 1.5 billion chicken strips, according to NPD. And chicken is definitely popular at foodservice. Broadline distributors shipped 4 percent more chicken to independent and micro/small chain restaurants and foodservice outlets this year compared with last year, said NPD.

“We can offer younger shoppers an upscale, specialty sandwich that they would find in a classic Italian deli,” DiPomenico says. “Italian cured meats actually are trending more than roast beef or ham.”

Adding pickled, fermented vegetables to sandwiches is another easy way to dress up lunch. “Deli meats purveyors have to go above and beyond the typical ham and swiss to appeal to consumers,” says DiPomenico. “This gives the deli program a boost in the face of increased competition from every corner.”

At last year’s IDDBA conference, the Show and Sell exhibit highlighted the grocerant (grocery plus restaurant) concept, which is appealing to more shoppers. This grocerant featured a small footprint, seasonal menu and chef-centric focus. For lunch, customers could try a more sophisticated item that was made accessible to all palates, such as a duck confit wrap. It’s easy to see how this concept could also promote locally sourced proteins, as well.

Ultimately, consumers will reward whichever outlet provides an entire meal occasion. Deli foodservice is the beneficiary of this trend as it grew 19 percent in dollar sales and 18.2 percent from 2016 to 2018, constituting 58 percent of total deli sales, noted What’s in Store. All prepared foods were responsible for $36 million in sales, up 139.5 percent from the last year, reported Nielsen.

The good news is consumers are open to picking up or ordering lunch from a variety of places, and want protein to be a part of it. NP