This website requires certain cookies to work and uses other cookies to help you have the best experience. By visiting this website, certain cookies have already been set, which you may delete and block. By closing this message or continuing to use our site, you agree to the use of cookies. Visit our updated privacy and cookie policy to learn more.
Home » White Oak Pastures has become a leading advocate for regenerative animal agriculture
Meat and Poultry ProcessingBeefPorkChickenIndependent Processor
Cover Story | Independent Processor

The last time that White Oak Pastures was on the cover of this magazine, it was because owner Will Harris had decided to build a processing plant to slaughter his own grass-fed beef. Over the last dozen years, the company continues to be at the forefront of producing pasture-raised beef.

And pork, sheep, goats and rabbits. And five different species of poultry. And leather goods, pet treats and candles. It also has an ecotourism/lodging business. Oh, and the company runs a general store/sit-down restaurant as well. It’s fair to say that there are larger meat processors in the country, but there is no company so diversified.

Along the way, Harris has realized that his job has changed several times.

“Then we set about making all these changes that mostly involved closing loops and being less and dependent on others and more and more dependent on ourselves, and put resilience into the farm,” Harris continues. “All of the sudden, I don’t think of myself as being in the cattle business or the beef business or the poultry business or pork business. I think that I operate an ecosystem here. That’s what I do for a living. I operate this biome that is White Oak Pastures.” 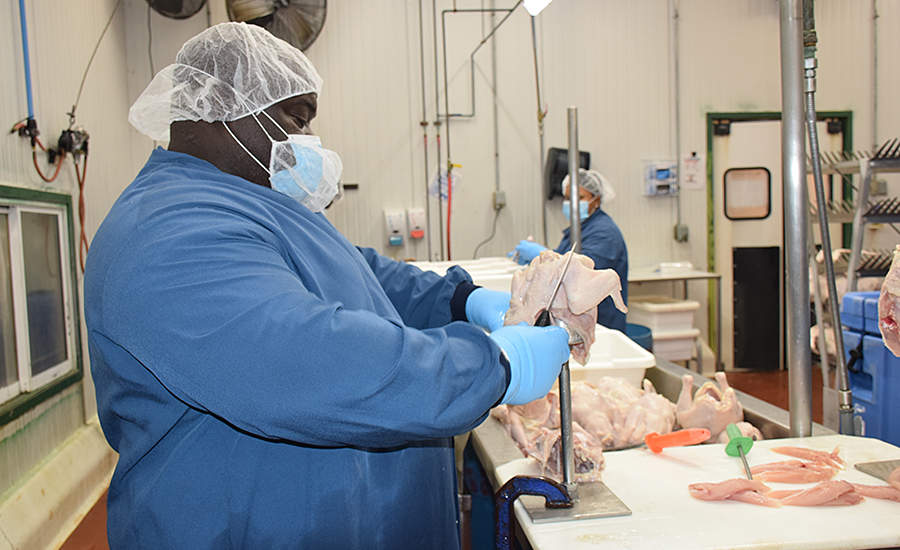 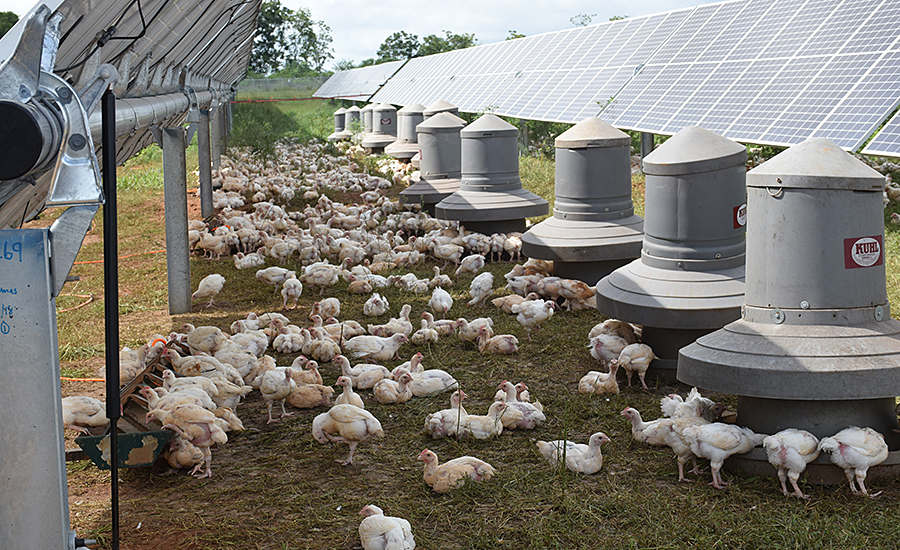 (Right) The chickens above are sheltering under a solar company’s panels prior to their harvest. They are part of the company’s new land management program.

White Oak Pastures is not just using its acreage to produce meat. It is using the collective knowledge of its team to improve the land. The team uses age-old techniques to restore nutrients to old farmland, turning depleted soil into vibrant land that can once again sustain life. Along the way, the land produces -- as a byproduct -- beef, pork, poultry, vegetables, honey and other items.

“People want to buy that byproduct, and I want to sell it to them. We monetize that so that we have money to keep operating,” Harris says.

The work isn’t easy. The original Harris Family land has been nurtured for more than 30 years, and is environmentally vibrant. The company buys or leases land that, as recently as a few years ago, was used to grow peanuts, cotton or other row crops. That land, damaged by conventional farming practices, needs years to restore.

“We’re not looking for a win, we’re just trying to work toward a long-term goal. It’s an intensive process that we have figured out,” explains Brian Sapp, White Oak Pastures Director of Operations. 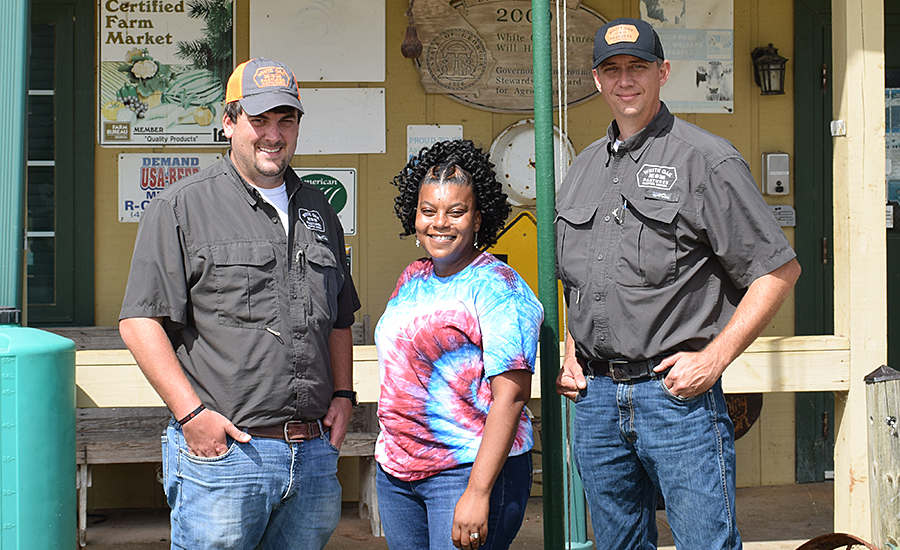 Justin “Buck” Wylie and Lisa Brown manage the company’s red meat and poultry plants, respectively, and report to Brian Sapp. They both are local residents who started on the processing line and worked their way up into management roles.

The company started its poultry slaughter operations in 2011 with the construction of a separate processing plant, adjacent to the red meat facility. The thought at the time was that it could introduce pasture-raised chicken to the same audience that were fans of its grass-fed beef offerings. The demand hasn’t been quite as high, but Sapp notes that the birds are serving a purpose by being the first animals to occupy that old farmland. They are the first step in a process that will eventually restore the land to full environmental and ecological health.

“We get a lot of benefit from this production model. Even though we’re not making money in the poultry business, we know the benefits we’re getting from the land offsets some of that,” he says. 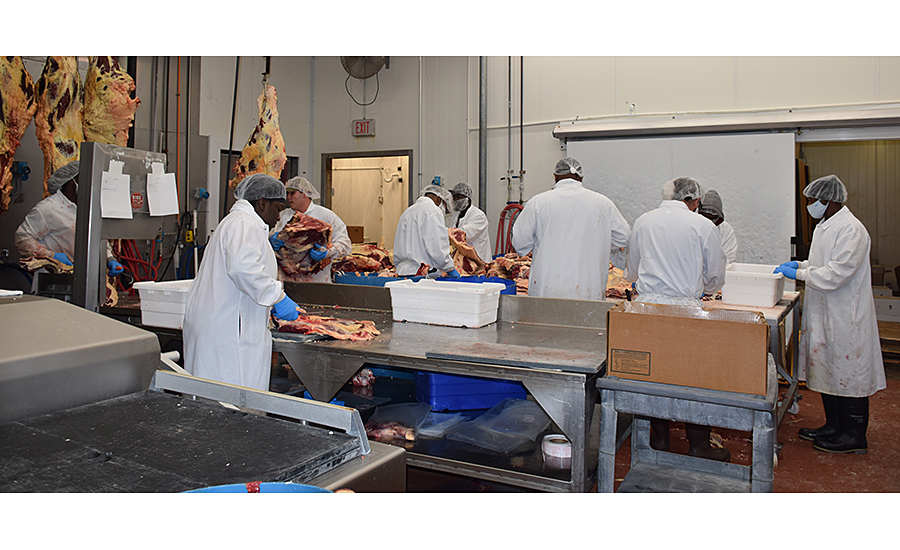 Sapp says that many of White Oak Pastures’ production methods aren’t conventional by any means. The poultry are pasture raised, so building large chicken houses is out of the question. Instead, they have repurposed old cotton module trucks. The trucks were mobile units that took the picked cotton and bound them into large blocks. Cotton technology now favors machines that pack cotton into round bales like hay, so the old module trucks have been relegated to the junkyard.

“We started buying them up for scrap metal price and put roofs on them for structure,” Sapp explains. They’re heavy so they don’t blow away, they have wheels on them so we can move them around. It was a pretty good deal for us, to find something we can repurpose.”

The cattle herd, which numbers some 3,000 animals, is kept in a single, massive group instead of being broken down into smaller herds. It is moved daily into a different 30- to 50-acre square for grazing.

“What this program does, is we bring in the cattle in, graze everything off and then move the cattle off of it and give it regrowth time,” he explains. “It doesn’t start depreciating the root system. The foliage system starts to grow, we let it mature, and then we bring the cattle back in.”

The ingenuity of the production team helped solve the issue of watering all the cattle no matter where they are. They placed massive rubber tires throughout the farm, poured concrete in the base, installed water pumps and turned them into rubber feeding troughs. The cows, which normally all drink at once, have learned that there is a constant water source available and will only go to the troughs when they need it. Given the amount of linear feet available at the round troughs, there isn’t overcrowding.

White Oak Pastures now raises 10 different species: cows, pigs (Iberico and Berkshire breeds), goats, lambs, rabbits, chickens, geese, turkeys (Spanish Black for the holidays and a domestic white breed year-round), guinea fowl and ducks. All of those animals are processed at the company’s two plants. Selling meat is not the company’s only source of income, though. Several years ago, the company bought a shuttered general store in Bluffton, cleaned it out, renovated and re-opened it. There is a full-service restaurant in the basement. A zero-waste facility across the street from the store produces leather goods, cowhides, candles, soap, pet treats and more. The company also set up a series of lodges on the property to appeal to eco-tourism. While the people who rent the properties can spend their time horseback riding or fishing in a fully stocked pond, visitors can learn about the company’s restorative agriculture practices and see them in action, too. Sapp says they operate as truth in advertising of the company’s environmental claims.

“If you don’t believe us, come down here, rent a cabin and we’ll show it to you,” he says. 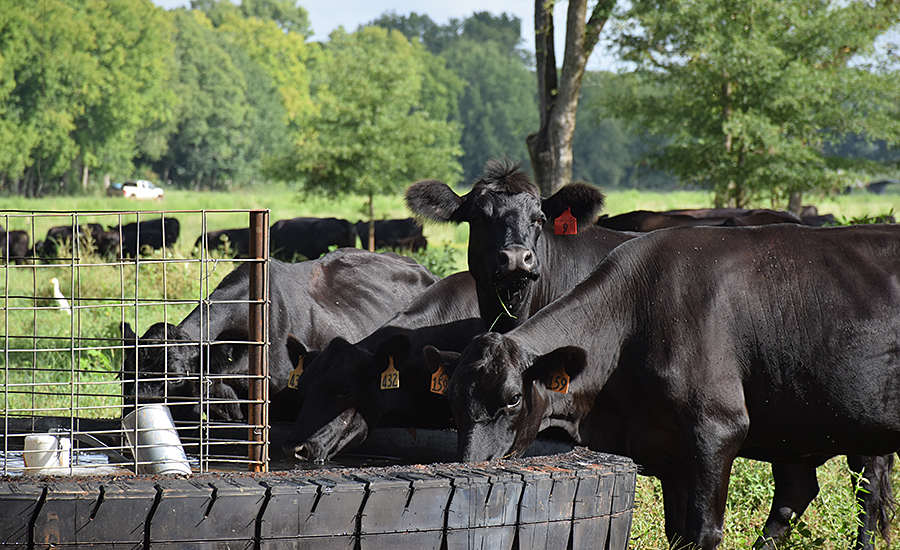 White Oak Pastures has been at the forefront of the grass-fed beef movement. The company’s products can be found in many Whole Foods stores, and it ships nationwide through its online store.

White Oak Pastures is always looking for a potential business expansion. One of the latest ideas is to use its animals as vegetation and erosion control. A solar panel array was installed in some former farmland near Bluffton. Instead of using pesticides and chemicals to control the vegetation under the solar panels, the owners of the panels contracted with White Oak Pastures to bring in a small flock of chickens and a herd of sheep. The animals are allowed to feast on the foliage and rest in the shade that the panels provide.

Sapp notes that the process of turning ideas into reality is pretty easy at White Oak Pastures. Under Harris’ guidance, plans don’t stay on the drawing board for months and months on end.

“He says, ‘Take some damn chickens down there, put them under the panels and we’ll see what happens,’” Sapp says, laughing. “But it builds good character in our management team. Let’s try it, see how it goes, and if we pull the plug, let’s make some changes and make it work even better.”

The company’s board of directors consists of seven people: Harris; daughter Jodi and her husband John; daughter Jenni and her wife Amber; Sapp, and Jean Turn. Each supervises an aspect of White Oak Pastures’ many operations, and they have multiple managers who report to them. Those managers then supervise the company’s 160 employees.

Harris says the structure is a big change from the days when he was the sole decision-maker, and he welcomed it.

“Twenty years ago, I had four minimum wage employees, and I was the only decision maker here,” he explains. “I started making changes and diversifying the business and expanding the business, but I continued to be the only decision maker. That was very inefficient and ineffective and very stressful for me. I think we make really good decisions compared to when I ran it very autonomously.” IP