Bacon remains one of the most versatile ingredients in dishes — able to grace a hearty burger or pair with chocolate. As consumers navigate pandemic dining, look for bacon to continue its growth at retail.

“The state of bacon has been relatively consistent over the past few years — some 53 percent of operators have bacon on their menu, compared to 54.7 percent five years ago, so relatively flat change,” says Lizzy Freier, managing editor at Technomic, a Chicago-based Winsight Company.

Despite the plant-based/plant-forward movement, bacon’s use as an ingredient has not waned.

“Though bacon is ubiquitous, there are so many things that can be done with it regarding flavor, processing and application that it is infinitely versatile and continues to be a new experience despite how familiar and ubiquitous it is,” says Maeve Webster, president of Menu Matters, in Arlington, Vt.

Options exist across all price points, which allows operators to continue to work with it in the face of ingredient price increases.

“As far as I’ve heard, there has yet to be a significant shortage of it, so it’s been easier to source than other items,” Webster says. “Additionally, bacon works well to go and can be applied to virtually any commonly ordered, off-premise occasions items, which is critical given how prevalent off-premise ordering continues to be.” 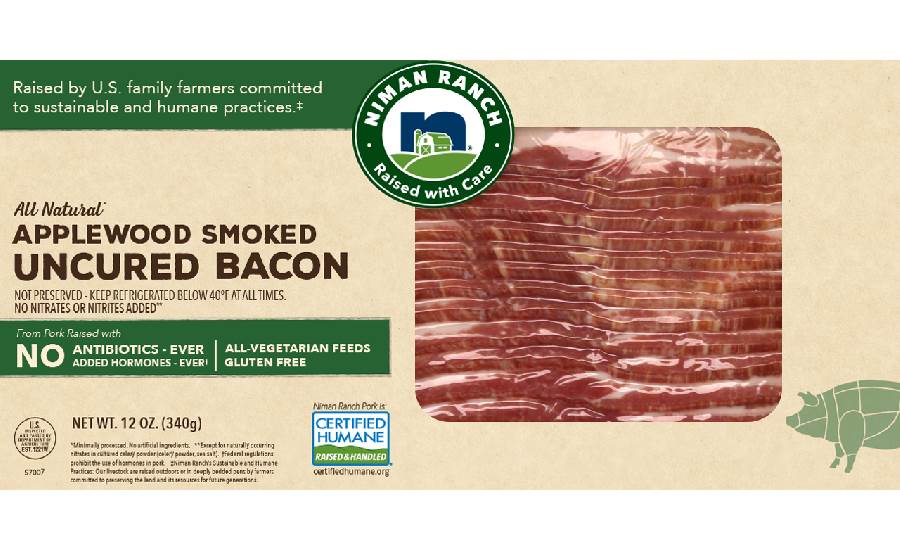 On the menu
Because of the COVID-19 pandemic, bacon declined on menus last year but at a much smaller rate than many other ingredients, Webster says.

“In the face of the past and current situation, I wouldn’t say it’s menued in more dishes, but it has maintained its relative share and isn’t being removed for the reasons I’ve noted above,” says Webster.

Although bacon is inherently a breakfast protein, it has appeared frequently on lunch and dinner menus, most notably on sandwiches and burgers but also incorporated into appetizers, sides and as a complement in entrees, says Webster.

“The top ingredients paired with bacon are classics you’d find in either sandwiches or breakfast items — cheese, tomatoes, lettuce, eggs, then onion as the top five,” Freier says. “The fastest-growing ingredients paired with bacon show a different story — wagyu (up 28.6 percent year over year), chocolate chip (up 18 percent) and raspberry dressing (up 15.8 percent). Mentions of bacon are also up in breakfast quesadilla entrees (up 30.4 percent year over year), whereas the top dishes with bacon are much more expected — club sandwich, bacon cheeseburger, then chicken sandwich.”

“While it is a low share of the population now, this is a trend that will continue to grow and impact the demand for pork-based bacon,” says Anne Mills, director at Technomic. 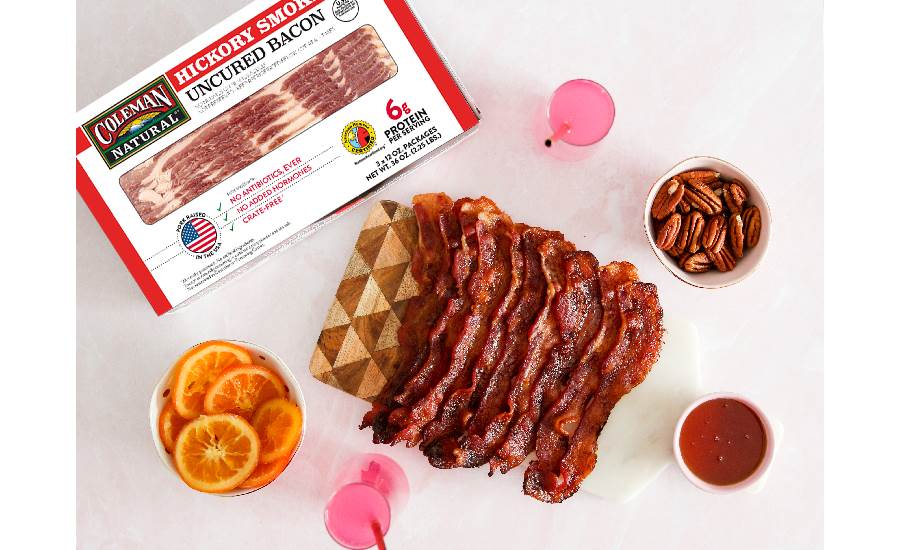 But there is still high demand for meat, including bacon, Mills says. For example, 70 percent of consumers who eat burgers are likely to choose bacon as a burger topping, making it the leading protein topping for burgers (2021 Technomic Burger Consumer Trend Report).

Bacon is consumers’ most preferred cut of pork, with 65 percent of consumers who often eat pork saying they’d be likely to order it at a restaurant at least occasionally (2021 Technomic Beef and Pork Consumer Trend Report).

Craft bacons and the flavors associated with them are still popular. “Consumers are generally more interested in process, sourcing and other details, so often bacon providers are noting breed, processing information, etc.,” Webster says.

Bacon can frequently be offered in various flavors, from smoked to glazed and everything in between, although standard bacon or commonly smoked options (applewood, etc.) remain the most broadly available and consumed, says Webster.

Steady at retail
At retail, bacon is a pandemic powerhouse but was already an area of growth before.

“In 2019, bacon generated more than $5 billion in sales, which was an increase of 2.9 percent versus 2018 with a small volume increase as well, at 0.3 percent,” says Anne-Marie Roerink, principal and founder at 210 Analytics, based in San Antonio, Texas. “Starting in March, bacon played a role in many more breakfasts, lunches and dinners and increased by double digits every quarter, led by the second quarter of 2020 with an increase of nearly 38 percent versus the second quarter of 2019.”

Even into 2021, bacon has performed well. “While it couldn’t quite match those enormous spikes of 2020 in the second quarter, sales are still well ahead of the 2019 pre-pandemic normal,” says Roerink.

Retailers are keeping the number of bacon SKUs stable as a mature and solidly performing category. “Much like the vast majority of meat and other products around the store, bacon sales have benefited from some inflation,” Roerink says. “Over the first half of 2021, sales averaged $5.77, which was up 6.8 percent from the first half of 2020.”

Offering convenience and flavor
Bacon is a staple in many meal occasions, and the fact that so many consumers spent more time at home meant great demand for bacon.

“We saw breakfast sandwiches do very well, and bacon is often a staple in those items,” says Roerink. “Not to mention the classic bacon and eggs for breakfast. Then we see many more lunches and dinners at home.”

For consumers who can’t choose between bacon and sausage, why not try both?

“Our new bacon breakfast sausage, just debuted this year, has been a big hit with consumers embracing the delicious bacon flavors from Niman Ranch they know and love, but now in a sausage link,” says Drew Calvert, vice president of processed pork at Niman Ranch, in Westminster, Colo.

Bacon is certainly a popular ingredient to add to sandwiches and salads, and bacon meat snacks like jerky are being launched in the snack category.

“We are also finding consumers are increasingly reaching for bacon for eating occasions outside of breakfast and using it as an ingredient, not just enjoying by the slice,” says Calvert. “The smoky and sweet flavor bacon imparts on a dish are perfect for classic, comforting meals like stews, stir fry, casseroles, quiches and more.”

Much like in the rest of processed meat, we see many new developments in the bacon category, from packaging and brands to flavors and thick cut or chopped. “For instance, there are some innovations that move beyond the strip of bacon to chopped bacon in resealable pouches that can be used on salads or in other meals,” Roerink says. “Another area is claims. These may be things like low- or no-sugar, natural or keto-friendly.”

Part of a cleaner diet
Health has certainly been top of mind with consumers this year.

“With the pandemic continuing to be an ongoing presence and consumers being more keenly aware of their health and wellness, shoppers are more interested in where their food is coming from and will be looking for high-quality meat products raised and processed in the U.S. on farms that care about the humane treatment of their animals,” says Mel Coleman, Jr., vice president of Coleman Natural Foods, based in Westminster, Colo. “If consumers spend the extra dollar, they want to spend it for a reason.”

More processors today, including Coleman Natural Foods, are requiring farmers to raise their livestock 100% crate free in both gestation and farrowing, to result in a healthier, stronger animal.

“We believe a healthier animal means better meat quality and a great tasting product for our customers,” Coleman says. “Plus we never use artificial ingredients or preservatives so consumers can feel confident they are feeding their family better.”

“As consumers are looking to eat cleaner and adapting diets that advocate for reducing sugar, this product can meet those needs, without sacrificing the high-quality flavor we’re known for,” says Coleman.

So, in a world of change, bacon remains good for the belly with — a little — less guilt.

Seafood remains a pandemic powerhouse at the start of 2021

July 4th, a big meat holiday, was even bigger amid pandemic