Consumers all over Missouri know that some of the best cured meats in the country are being made by Country Meat Shop.

Drivers passing through Moberly, Mo., on U.S. Highway 63 might notice the distinctive red barn-looking building and see the signs that tout award-winning bacon, ham, hot dogs and other products. They might make a mental note to stop by there on the return trip and see just what that building is. If they do, they will discover what Missouri residents have known for years: Country Meat Shop is one of the top meat markets in the country, and its growing customer base keeps the business expanding.

A recent expansion has doubled the company’s retail space to allow for the addition of many more retail coolers and freezers. It is also working to perfect the rustic look of the building’s front, with the addition of barn doors and other decorations.

“You drive by places, and you'll say, ‘That kind of looks like a neat place. I'd like to stop there.’ That's kind of what we're hoping,” says Mark Reynolds, who owns and operates the business with his wife Lara. He notes that the four-lane highway next to Country Meat Shop gets heavy traffic, with people coming and going from nearby Columbia. “We get the comments like, ‘I don't know how many times I've been meaning to stop by. I'm glad I did.’ And then every time you hear, ‘We'll be back.’ Evidently, we impressed them.”

Country Meat Shop originally operated in a 2,900-square-foot space. Expansions have doubled the size of its footprint, and Reynolds also added a 1,200-square-foot side building for storage in 2020. The expansion has taken place in gradual stages, with the first stage made to streamline the company’s deer processing operations. After that, Reynolds added its packaging and further processing areas. The final stage is the new retail area, which Reynolds expects to have completed by September.

“With COVID, we took a big jump in sales ‐ about a 30% jump. And we have been able to maintain that sales volume, even throughout the last year and a half or two years,” Reynolds says. “With this [expansion] I anticipate another good jump because of just the openness of this building.”

Country Meat Shop opened its doors in 2011, but Reynolds is a fourth-generation meat processor. His great-grandfather started a packing plant in Moberly in 1934, and the family later launched the "Little Dixie" line of cured hams. Reynolds and his brother Dan helped to transition the company into the processed meats business. A fire in 1989 destroyed the plant, and the family decided not to reopen it. The Reynolds brothers both found work at a nearby Oscar Mayer plant and were quickly promoted to shift supervisors. The experience at working in a large production facility was an educational experience for them. 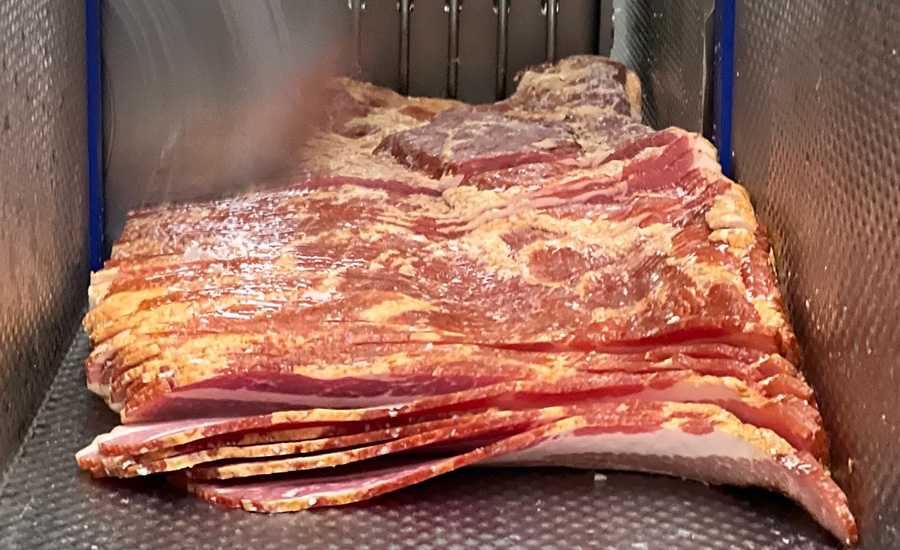 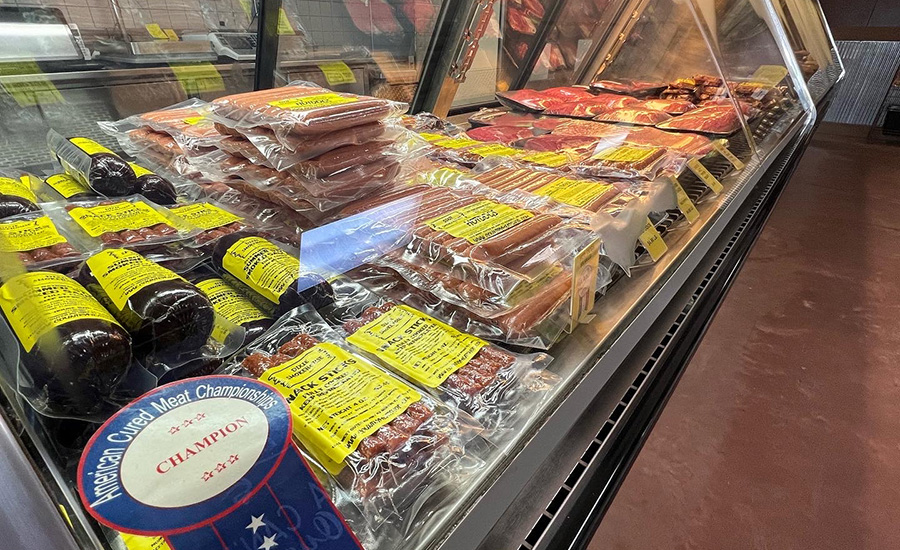 “We both learned a lot about food safety, productivity, automation, which is why I have a lot of equipment and not very many people,” Reynolds explains. “I’m big on what equipment can do.”

The brothers decided to relaunch the family brand as part of a joint venture with some other partners. Reynolds split from that business to concentrate on his own work in 2011. He had been doing deer processing on the side since 2006 and moved into that building, making it into a meat market. Country Meat Shop’s current retail space isn’t large, but it features a fully stocked meat case and a couple of coolers that show off many of the products that the business offers. The expanded retail area will allow the full range of products to be sold, as well as multiple new flavors of sausages and brats.

As Reynolds noted, the back rooms of Country Meat Shop emphasize machinery over manpower. Among his latest purchases are a bacon slicer and rollstock packaging machine. Reynolds and his long-time meat cutter, Allen Carter, make all the products themselves, and the high-speed equipment allows just two or three workers to slice, weigh and package a large amount of product in a relatively short time. Lara Reynolds joined the company full-time about a year and a half ago, and she manages the bookkeeping and the retail store. She retired from her own career in sales for the food distribution industry. 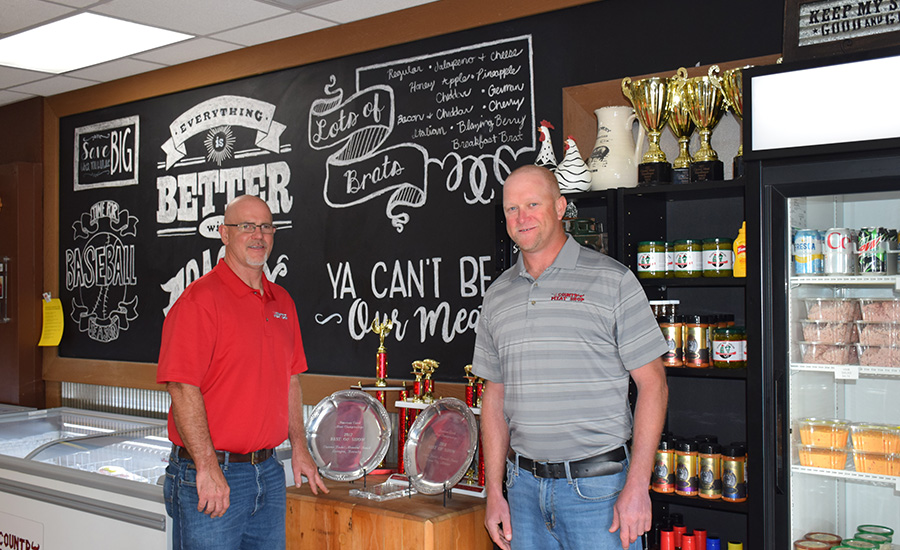 Mark Reynolds (left) and Allen Carter (right) show off some of the awards Country Meat Shop has garnered.

“My wife has always had a good job,” Reynolds said. “It enabled me to take this business on, and it could struggle if it had to until we got it up and going. The problem is that she's such a good salesman, we’ve got to work harder to keep up with her!”

The Reynolds family business had been associated with the Missouri Association of Meat Processors, and once Country Meat Shop got its start, Reynolds began participating in the association’s cured meat products competition.  In 2015, after winning eight Grand Champions and six other top four placings and the overall Cured Meat Excellence Award, he began entering products in the American Association of Meat Processors’ American Cured Meats Championship (ACMC) as well. At his first ACMC, two of the products won awards, and the other five were just a few points away from placing.

“With the MAMP competition, I saw how close I was. That's when I really started pushing and trying harder,” Reynolds says. “Allen and I are trying to make competition products every day. We’re testing and fine-tuning the process every day we make product.  So when it comes time for AAMP or MAMP, really there’s not anything we have to do differently.”

Country Meat Shop has won more than 150 state and national awards for its products. He has won two Best of Show Awards at the ACMC — 2017 for a Round Bacon and 2018 for a Shank-On Boneless Ham. At the 2022 ACMC held in Des Moines, the company won Grand Champion awards for both Coarse-Ground and Emulsified Frankfurters/Wieners.

Country Meat Shop displays many of its awards, and the hardware does help to spur sales. The success Reynolds and his team have had at the cured meat competitions has changed the business as well. At the onset, Country Meat Shop was selling primarily steaks and ground beef, with a few of the processed items. As the awards started coming in, the company was able to capitalize on them by advertising award-winning hams, bacon, hot dogs, and more on its in-store signage and its outside advertisements.

“The popularity of our award-winning products has flipped from a majority of our sales being fresh meat to processed meat, which is where the profit margin is. It’s given us a huge leg up,” Reynolds notes. “Comment after comment is, ‘I won’t eat a hot dog anymore, but now that I bought yours, I’ll eat hot dogs again.” 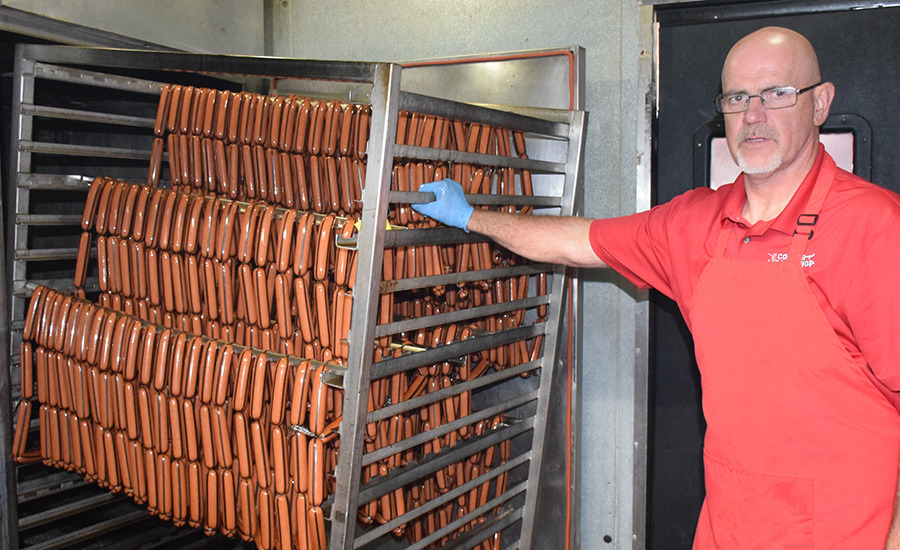 "The popularity of our award-winning products has flipped from a majority of our sales being fresh meat to processed meat," Mark Reynolds says.

Country Meat Shop maintains its deer processing services. Reynolds has a crew of eight to 10 seasonal workers who come in every year to process up to 1,300 tickets annually. Even though the workers have good jobs within the Moberly community, they still show up every year for the camaraderie and the extra holiday money — and the food.

“We eat like kings during deer season,” Reynolds says. “We feed the guys lunch and dinner because they get dirty and don't want to go out and sit down to eat somewhere.”

Country Meat Shop has expanded its repertoire in recent years with a “cater it yourself” option. It sells frozen aluminum pans that feature entrees like pulled pork and barbecue brisket, as well as sides like cheesy hashbrown casserole, baked beans with bacon, and macaroni and cheese. Consumers or local businesses can buy the trays they need, warm them up in an oven and serve a full meal. “Through word of mouth, it really is starting to grow,” Reynolds says. “We used to make that stuff maybe once a month, but now we’re making it every two weeks or a week and a half.”

Like all meat processors, Reynolds is trying to navigate the price fluctuations and supply chain issues in the meat industry. He has stopped selling brisket from time to time, when the price soared past what a typical customer would be willing to pay. Fortunately, the product diversity of Country Meat Shop has allowed customers to find plenty of reasonably priced options. Reynolds has even made Facebook posts to let customers know when fresh meat prices were overinflated and that there were alternatives.

“Every one of our core (cured meat) items has won at AAMP — hams, bacon, hotdogs, summer sausage and smoked sausage,” he says. “Don't be going overboard paying for burger when there’s all these other items that are reasonably priced. Don't pay $8 a pound for a burger when you can eat national champion hot dogs or national champion bacon.”

Sam Gazdziak is communications manager for the American Association of Meat Processors.