Processors need to avoid the common traps in sanitation. 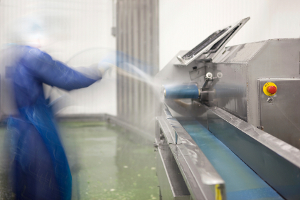 A clean plant by definition has all visible soil removed. Typically cleaning will remove 99 percent of the bacteria, but sanitation is necessary to remove that last 1 percent, which can be a really important 1 percent depending on the type of product. Over time, the bacteria in that 1 percent may impact the shelf life of the product fairly dramatically.

To measure the effectiveness of sanitation it is necessary to test beyond what can be seen with the naked eye. David Jacobs, quality assurance manager at Mountain States Rosen’s (MSR) Greeley, Colo., facility, believes that holding the crew accountable for the results of their sanitation plans makes them aware of the importance of not just the physical cleaning, but ensuring that surfaces and equipment are chemically clean, reducing the potential presence of biofilms. It is imperative that supervisors not only stress to their crews that the protocol for sanitation must be followed, but that members participate in regular training to ensure they are prepared and armed with the most updated information on sanitation practices, he says.

Despite the repetitive nature of the sanitation check list, each step plays a vital role in both physical cleaning and chemical sanitation. In addition, team leaders must remind their crews that not every day will require the same sanitation practices, Jacobs says. For example, putting forth the extra time on a piece of machinery that was used heavily that day is important to a consistent sanitation schedule.

All food contact surfaces and equipment used for processing should be sanitized, and special attention needs to be taken in areas where further-processed or retail-ready products are produced. Critical areas where microorganisms harbor and environments conducive to their growth also need attention, says Norman Marriott, emeritus professor at Virginia Tech, Blacksburg, Va. For example, floor drains, cracks and crevices of equipment, bearings, the area underneath conveyor belts and hoses can all be challenging areas to clean and sanitize. Ceilings and walls also can be viable contamination sources, especially if condensation is present, he adds.

Marriott also advises that supervisors need to caution their employees about recontamination of a sanitized area. Recontamination can occur by dragging a dirty hose in a cleaned area or wearing dirty footwear or clothing.

“Something that needs to be emphasized in food plants, and particularly meat plants, is that we’re talking about something that is consumed by humans,” Marriott says. “With improper sanitation, it’s possible that there could be a foodborne illness outbreak. And if there is a foodborne illness outbreak, then there can be serious illnesses and sometimes even death depending upon the microorganism involved.”

“There are parameters, and if you shortcut it, you may not be able to evaluate the ramifications of shortcutting CIP systems from what they were designed to do,” Marcy says. “I am concerned about CIP systems and allowing situations that are uncleanable where people create modifications and they create uncleanable harborages in plants.”

One of the most common traps in sanitation is falling into a routine and just the foam, rinse and sanitize approach. To be effective the process must be aggressive and involve scrubbing and thorough cleaning of organic matter, MSR’s Jacobs says. To maintain the upper hand on bacterial growth, the sanitation must be a live document that is not overlooking any possibilities. Morning pre-operational inspections should help the sanitation crew evaluate the effectiveness of their plan and assist in helping change tactics if necessary, he says.

A thorough cleaning has to be done. “If you don’t clean the surface, you’re not going to be able to sanitize it,” Bucknavage explains. “Any remaining material that’s on the manufacturing line is going to inactivate any sanitizer. The second thing, after you clean, you have to rinse and you have to get rid of the cleaner that’s there. Again if you don’t get rid of the cleaner, any sanitizer you use is probably going to be inactivated.”

Employees often spend too much time wetting the area to be cleaned and not allowing the cleaning compound to do the work, Marriott adds.

“This is time-consuming and wastes water,” he explains. “Another mistake is that many times the water temperature is too high. If the water temperature is too high, there can be condensation problems, and condensation problems can really be serious because of the fact that this is more moisture is available for microbial growth.”

One of the largest challenges a sanitation plan faces is the adaptation of bacteria to become resistant to a sanitizer’s effectiveness, MSR’s Jacob says. This is solved by changing sanitation plans and sanitizers to allow for a more effective sanitation program.

In addition, a wide variety of product cuts and a growing number of case-ready, shelf-life critical items makes a proper sanitation plan even more important, Jacob says. These items are much more susceptible to bacterial growth, and a multiple-hurdles strategy must be in place to help minimize the exposure to bacteria that erode product integrity, he says.

“It’s important for the companies, if they are going to make that decision to shrink that sanitation time down, to provide the resources and provide the people that they need to get the job done,” Bucknavage says.

Time constraints on the sanitation crew is a good reason to seek an outside audit, to draw attention to any problem areas that the team doesn’t see in daily audits, Marcy says.

Another sanitation challenge is training, which goes beyond sanitation workers to sanitation management.

“Sanitation is what we consider one of the prerequisite programs for food operation, and unfortunately we don’t put the resources behind it — putting a good stable crew in there and making sure they are trained,” Bucknavage says.

The sanitation crew needs to know not only what to do, but why they do it, Marriott says. Top management also needs to be educated on the value of sanitation, and not view the process as an unfavorable expense.

Moving beyond traditional peppers and spices