Chicken processor positions itself to be an industry leader in all facets of processing business after a year of food-safety challenges.

This summer, during a trip to California, Andy Hanacek, editor-in-chief of The National Provisioner, sat down with Ira Brill, director of corporate communications for Foster Farms, to get an update on the company’s efforts to bounce back after a challenging year in which a Salmonella Heidelberg outbreak dominated the food-industry headlines in California and forced Foster Farms to reassess its food-safety strategies. What follows is a portion of that conversation:

Andy Hanacek: It has been a roller-coaster year for Foster Farms, without a doubt. As we sit here in July 2014, what do you believe has changed the most for Foster Farms after all this?

Ira Brill: We have, in the last year, really dedicated ourselves to becoming leaders in food safety. Foster Farms always has been a leadership company in many areas, but in the area of food safety, quite honestly, we satisfied ourselves with being average. We realized that we had to step up and be a leader. So we’ve invested close to $75 million, changed a lot of our management procedures and brought in an extraordinarily talented group of outside experts. The net result is, right now we feel we’re producing probably the safest chicken you can buy. Our past 14-week data is about three percent Salmonella prevalence versus an industry benchmark last measured in 2011-2012 at 25 percent.

Hanacek: What are some of the initiatives you’ve undertaken to improve food safety?

Brill: You have to look throughout the process, from when you purchased the breeder stock to when the product is packaged. That’s exactly what we did. We now ask our breeders to provide the pedigree of the stock that we’re buying. … We also began to really engage in biomapping, taking as many as 8,000 separate samples on an individual ranch to determine if Salmonella’s present, and if so, where it’s present. In fact, we’re testing not only on our own property, but even on adjacent property to ours.

When you get into the processing plant, there were equipment changes that had to be made. We needed to look at storage conditions, plant temperature conditions. You want to negate the potential for Salmonella at every step in the process. The other thing that we’re doing is sharing all this with the industry. The best thing that can happen coming out of this situation is a safer food supply with the consumer, and that only happens when we share the learning that we’ve acquired. 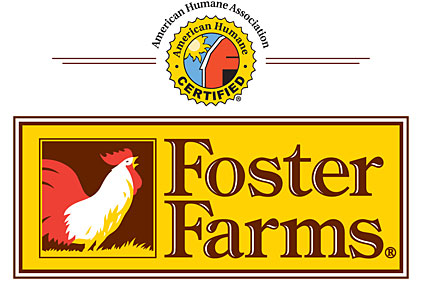 Hanacek: Are you working with any local universities or third parties any more than maybe you were in the past?

Brill: I think part of what we learned in all this is as good a company as Foster Farms is, we could not solve this problem exclusively with our own people, who are very good. As far as universities, probably the most significant [additional work] we did with UC-Davis [and Dr. Christine Bruhn, who is a well-known expert in consumer behavior, food science, and consumer economics,] was safe handling and preparation. The problem is, most consumers are aware of Salmonella, and they’re aware they’re vulnerable, but they tend to believe that they will get a foodborne illness outside the home, at a restaurant — anywhere but their own home. So, UC-Davis researchers videotaped 120 consumers and observed what their handling and prep habits were, saw there were a lot of gaps, and are working with an organization called Partnership for Food Safety Education to publicize the findings to raise awareness of safe handling. One of the things that the UC-Davis study showed is, consumers recognize that they have a role in food safety. They say the primary responsibility is the producer, but almost neck and neck is the consumer’s responsibility followed by the government’s responsibility. So the way we look at is, it’s the producer’s responsibility to produce a product with the least amount of Salmonella. The consumer can take steps which, even at a three percent level, would avoid possible Salmonella. And the government, in essence, acts as a regulatory authority.

Hanacek: I’m glad you brought that up, because I was going to ask about some of the criticism that Foster Farms received. I think that’s one of the main challenges with the way the meat industry is portrayed in the consumer media: Whenever there’s a recall or an outbreak or a public-health threat, it’s always perceived as only the processor’s fault — while processors do have a big responsibility in producing the food, the stories we read never seem to turn that magnifying glass toward the consumer’s role to basically finish the job.

Brill: Well, I do think it’s more than that. This is a very, very complex issue. At times, it involves inconsistent government policy. And with the media, you have to know what you are dealing with — a couple of column inches, maybe a minute of television time. So almost by necessity, even if you discount the media’s tendency toward sensationalization, the story gets reduced to the most simple form. Unfortunately, when the public-health advisory came out, there was a great deal of miscommunication. When the issue of antibiotics came up, it was never made clear that the antibiotics used to treat Salmonella were fully efficacious. I think that’s a gap, and I do think that we will all benefit if there is greater rationality and clarity both in policy and in communication.

I don’t think you can begin announcing that there is an outbreak without disclosing all of the information that’s fully available to you, including the fact that this disease — although, again, nobody wants anybody to get sick — is fully treatable. All that [omission] does is to create greater anxiety in the marketplace, and what we should be focusing on is improving food safety by creating a food supply that people can rely on with confidence. When you don’t bring all the facts to the table, it doesn’t necessarily contribute to that.

Hanacek: What details can you share regarding how hard this year has been for Foster Farms and how the company has tried to bounce back in terms of market, sales, etc.?

Brill: There was an impact, primarily related to the loss of some distribution, most of which we’ve gotten back. I think consumers in October [2013] during the public health advisory, were very confused, because it seemed to suggest that product in the marketplace, which the USDA had approved as wholesome, was — if you used the words of the media — now “contaminated.” I remember even going out and talking to meat managers and finding out that they were confused. Also remember that the public health advisory occurred in the middle of the government shutdown, and the CDC began talking about a dangerous outbreak, so there was a lot of confusion.

As that confusion receded, basically our sales picked up, though they’re still off a little bit. In talking to consumers, I was absolutely amazed. For example, some consumers told us, “Well, I stopped buying Foster Farms maybe for two weeks.” So we’d ask, “With all the publicity that was going on, why only two weeks?” They’d reply, “Well, you know, I knew they’re going to fix it.” And in the end we did. So we redeemed the faith that the consumer has in us.

Hanacek: A brand with a loyal following such as Foster Farms gets that type of confidence, but was there a point in the entire process that the company might have been concerned that even those loyal brand consumers might be turned off the product for a much longer period, particularly when reading some of the things that were said in the media during that initial period under fire?

Brill:I would say there was some concern. But the other thing is, part of what we had to do was determine exactly what we were being asked to do [by regulators], because there was no standard in place. We had certain administrative orders that we had to address from USDA. It took some time. One of the questions that I’ve been asked is, “Why didn’t Foster Farms say anything at the very beginning?” The answer is, the energy of the company, the resources of the company were really focused on how to address this issue. I don’t think there’s been any company in any government-regulated area that has been told to achieve a five-fold improvement over where the rest of the industry operated without a benchmark. That’s an extraordinary challenge. I think it’s to Foster Farms’ credit that the company rose to that challenge, but that’s what we were all focusing on.

Brill:There were some changes we did have to make. The thing that’s unique about the American Humane system is that it really puts in place a standard that you have to be able to demonstrate that you’re meeting 365 days a year, 24/7. … We had to make some modifications with regard to lighting, although it wasn’t significant, as I recall. Beyond that, we had to set up a record-keeping system. Foster Farms has always been dedicated to animal welfare, but we got to a point where, our consumers were saying, “We want to see somebody that’s a third party, somebody that can look at animal welfare with objectivity.”

I will say that what animal welfare has in common with food safety is, they’re both areas of continuous improvement. You never really reach the end with animal welfare. There is going to be constant research done, and our agreement with the American Humane Association is such that, if they change the standards, then we have to comply. So there is always going to be the opportunity for continuous improvement. It’s the same thing with food safety. You never really get to the end of it.

Hanacek: If you could summarize how Foster Farms has come out of this past year, how do you believe the company has emerged? What do you think Foster Farms has learned most to this point in the process?