This website requires certain cookies to work and uses other cookies to help you have the best experience. By visiting this website, certain cookies have already been set, which you may delete and block. By closing this message or continuing to use our site, you agree to the use of cookies. Visit our updated privacy and cookie policy to learn more.
Home » Hudson Valley Foie Gras welcomes visitors to learn the truths of foie gras production
Processor ProfilesIndependent Processor

Nothing to Hide: How one company is combatting misconceptions about foie gras production by offering total transparency.

Opponents of foie gras production have a well-scripted argument to explain why the product should be banned. Foie gras, the fatted liver of a specially fed duck or goose, is produced by inhumane methods, critics say. To counter that argument, Hudson Valley Foie Gras, one of only two producers in the United States, has made an interesting decision: total transparency. Come to our farm, the company says, and see for yourself that the company’s ducks are treated well.

Izzy Yanay, general manager and co-founder of Hudson Valley Foie Gras, says that the choice to embrace transparency was an obvious one. “We either bar people and put up huge fences around the farm, and then they would try to infiltrate the farm by acting like prospective employees. Or we say, ‘Come and see! We’re not trying to hide anything.’”

The Ferndale, N.Y. company isn’t making those claims without any backing. Over the years, Hudson Valley has fine-tuned its live animal practices with the help of animal welfare experts. Certified cage-free, the company has developed a system that closely mimics the natural behavior of waterfowl in the wild. If a prospective chef wants to visit the farm to see first-hand how the product is made, they can see the ducks, watch the feeding, and learn about the history of foie gras — all five thousand years of it.

To understand the intricacies of foie gras, it helps to understand a little of its background. It is perhaps the oldest delicacy, dating back to the Egyptian empire. Egyptians hunted geese from Scandinavia and discovered that their enlarged livers were particularly delicious. There are carvings of Egyptian farmers feeding geese figs in an attempt to fatten their livers.

Part of the problem is that people think of enlarged livers as a bad thing. It is — for people. It’s a unique adaptation in waterfowl that an enlarged liver is the sign of an abundant food supply, explains Marcus Henley, farm manager for Hudson Valley Foie Gras. In preparation for their migration, geese and ducks eat as much food as possible, increasing the liver to about three times its normal size. That fat is converted into energy to make the long trip.

“What we’re doing here on the farm is reproducing that natural cycle,” he explains. 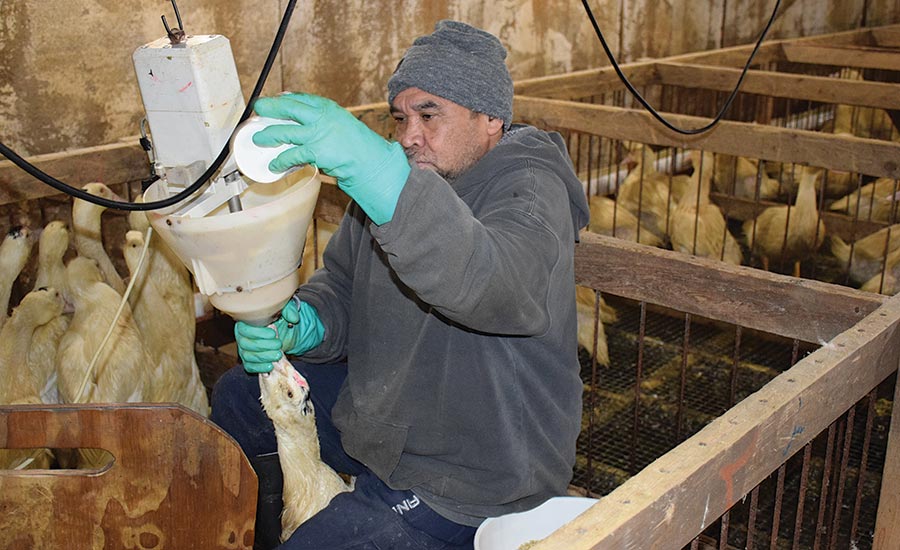 Ducks are hand fed three times a day during the final 20 days before harvesting. The feeders are trained for humane handling and use either grain or liquid feed on the birds.

Hudson Valley has made changes to the traditional foie gras process that was perfected in Europe. The company uses a Moulard duck, which is a sterile hybrid of a South American Muscovy and a Pekin, which is derived from the mallard, Henley explains. The ducks are much more docile than the temperamental goose and can be handled by employees easier.

“It’s a really wonderful duck. One of the reasons that we’re able to bring people to the farm and take advantage of the ability to let people see the farm is because they have hybrid vigor. They are incredibly disease resistant,” he adds.

Hudson Valley’s ducks are fed using the gavage method, which involves putting a tube down the duck’s throat. Grain or a liquid feed is poured down the tube to fatten up the liver. Again, critics of foie gras tend to think of the duck in human terms when considering the animal’s welfare, leading to assumptions that are not true. The ducks are not harmed by this process.

“If I hand you a tube and say, ‘Slide this down your throat,’ you would be horrified, because your windpipe (trachea) and esophagus have a common opening,” Henley explains. “For the waterfowl, the trachea and esophagus are separate and parallel.”

Ducks, unlike humans, have a crop as part of the digestive tract. It’s used to store excess food that is to be digested gradually over time.

“What we’re doing in feeding them is depositing food in the base of the crop. The gizzard is just past that, so there’s no forcing anything past the gizzard. All we’re doing is dropping food into the sac,” he says.

Furthermore, the lining of the duck’s throat is naturally stronger than a human’s. Henley points out that ducks eat crayfish in the wild, so that lining has to be tough enough to swallow such an animal whole without injuring the bird. The proper insertion of the metal tube, then, does not harm the bird.

When the ducklings are hatched, they are placed in one barn where they have plenty of access to space, food and water. The ducks that are specifically raised for foie gras are transferred from the barn to a pen after about 80 days for the final 20 days of feeding.  Each pen holds about a dozen ducks. A well-trained feeder enters the pen three times a day each day and hand-feeds the ducks.

The feeding step is important to monitor the welfare of the animals. Typically, ducks stay about 10 feet away from humans in the barns. In the smaller pens, ducks will move a few steps back when the feeder enters the pen, but they show no signs of discomfort before, during and after the feeding process.

Each feeder using the grain feed has about 350 ducks in his or her care, and that feeder will remain with that particular flock for the entire gavage process, for continuity of care. Each feeder performs an assessment of each duck prior to each feeding. That assessment will tell the feeder if the duck is ready for harvesting or if it doesn’t need to be fed at that moment.

“Every time he’s feeding the ducks, he’s palpating the crop, so that if there’s food left over from a previous meal, the duck is signaling to you physiologically that it doesn’t need to eat right now,” Henley says.

Each duck is tagged with a leg band that corresponds to that specific feeder. During the slaughter, the liver is graded and weighed, and the feeder is given a profit-sharing bonus based on the results. Feeding and caring for the animals becomes more than just a task; it’s a potential for extra revenue.

“The quality of the output also reflects proper animal care,” Henley adds. “If we have a feeder that has a mortality rate or a lower percentage of quality orders, we have a lot of work on the farm other than feeding ducks. Using the data from every group of ducks, we’re able to select feeders and make sure they are doing an appropriate job.”

Hudson Valley believes in using hand feeding as a way of maintaining an artisanal operation and the best animal care. Henley calls the operation low-tech — by design — but the company is adding technology where it can. Some feeders use a liquid feed that is produced in-house and administered through an automatic pump. The hand-feeding process is the same, but the pump feeds the birds faster than the traditional method of pouring grain down a funnel. As a result, the feeders with the liquid method
are in charge of 540 birds.

Before he came to the United States, Yanay was the field manager for the largest foie gras producer in Israel. After finding a financial partner, he established the first foie gras farm and processing plant in the United States in 1982. At the time, he says, he knew nothing about the U.S. market and was not aware that the widely consumer European delicacy was virtually unknown in America.

Fortunately, Yanay came to the United States at the right time. Thanks to chefs who had trained in France and were familiar with foie gras and distributors like D’Artagnan, which were working to introduce American consumers to European delicacies, an interest in foie gras was starting to grow. Yanay established his business, and then in 1990, he launched Hudson Valley Foie Gras with partner Michael Ginor. 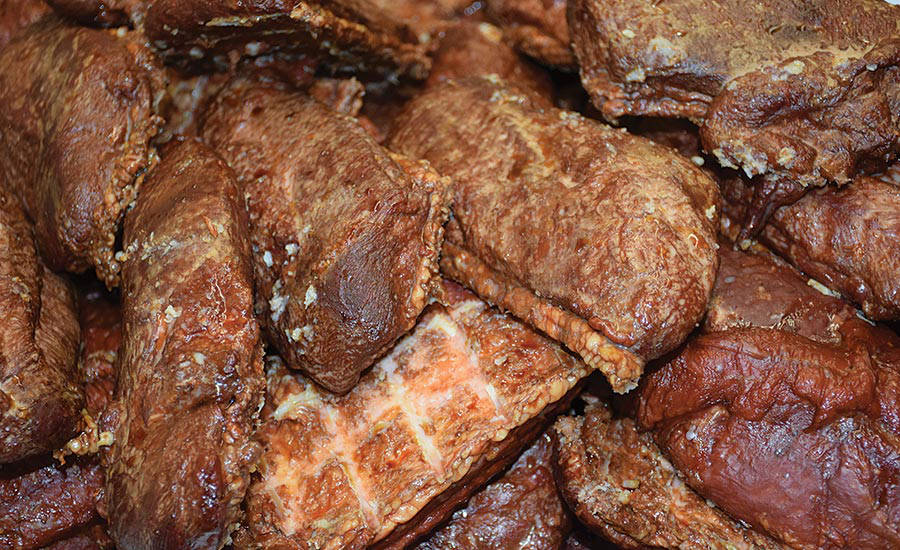 Since then, the company has received numerous awards for its products, from organizations like The James Beard Foundation and the American Academy of Hospitality Sciences. Its products are found in some of the finest restaurants in the country, and it has a thriving mail-order and retail business as well.

“I’m pretty safe in saying that, from a processing facility and not prepared by a chef, this is the best torchon that we know anything about, here or in Europe,” Henley boasts.

Because low cooking temperatures serve the further processed productbest, the foie gras is high-pressure pasteurized by a third party company.

In addition to the foie gras, Hudson Valley produces numerous items to ensure that the rest of the duck is utilized as well. Duck breast and whole ducks are popular items, and the company has become involved with further-processed items like duck bacon, duck hot links and smoked duck breast. Chef Jenny Chamberlain was trained at the Culinary Institute of America and worked in the restaurant industry before joining the company to work on product development. The company also processes organic, antibiotic-free chickens, some of which are sent to large distributors and others that are processed for small local farmers to sell under their own brands.

Of course, foie gras comes with its own controversies, primarily due to the misconceptions about animal welfare. It was at one time illegal for restaurants to sell foie gras in the city of Chicago, and the ban in California to produce or sell it changes depending on which side won the latest appeal — the ban was reinstated in September 2017. That decision will be appealed, with Yanay reiterating his belief that the state is violating the commerce clause, since it is the federal government’s role to control trade with foreign countries or between states.

Animal rights activists target foie gras because it’s easy. There are only two processors in the country (both in New York), and politicians can use a ban as a quick popularity boost by saying they’re against cruelty to animals. Hudson Valley’s best weapon has been in educating the chefs in the particular city or state and inviting them to the farm to see the company’s practices. Those chefs then talk to their legislators and present the side of foie gras production that the activists fail to mention — it’s not an inherently inhumane production. A foie gras ban, they say, hurts their business.

“It’s not that they sell so much foie gras, but the fact that they have foie gras is a mark of excellence for the restaurant. It’s important for them to have the ability to present it, even if they only sell one pound a week,” Yanay says.

He asserts that the company will continue to fight the activist groups, all the way up to the Supreme Court if need be.

“If the Supreme Court will hear us and say that they cannot keep a product from entering, then maybe they [the activists] will have to find another way to get famous,” he says.