Barbecue is growing moderately in restaurants, with overall barbecue menu items growing 11 percent from the fourth quarter of 2016 to the fourth quarter of 2019, according to Chicago-based Mintel International’s Menu Insights (MMI). In menu dishes featuring barbecue sauces, among the quickest growing are boneless chicken wings (up 32 percent), chicken wings (up 13 percent), barbecue pizza (up 13 percent) and bacon burgers (up 4 percent).

“The uptick in chicken mirrors a larger industry trend in favor of this protein, which allows consumers to indulge in certain indulgent preps — barbecue sauces, fried chicken — while still enjoying the health halo that a leaner protein offers,” says Jill Failla, Mintel foodservice analyst. “Pizza and bacon burgers, on the other hand, demonstrate consumers’ willingness to still treat themselves with their favorite dishes when dining out. These latter two dishes also demonstrate how barbecue sauces are growing outside of their core applications, e.g., ribs and traditional barbecue proteins and appearing in a wider variety of dishes.”

Datassential, in Chicago, also reports chicken is the most menued protein paired with the term barbecue. For example, 68 percent of restaurants with barbecue on the menu offer at least one dish paired with chicken, followed by pork with 37 percent.

People who follow diet trends such as the Keto diet are gravitating toward grilled, fire and roasted cooking processes, says Phil Butler, vice president of company stores and culinary at Dickey’s Barbecue Restaurant, based in Dallas. In turn, hickory-smoked, antibiotic-free chicken breasts have been popular for Dickey’s 500 locations along with hickory-smoked turkey sandwiches. On the other hand, fried chicken items still remain popular too. 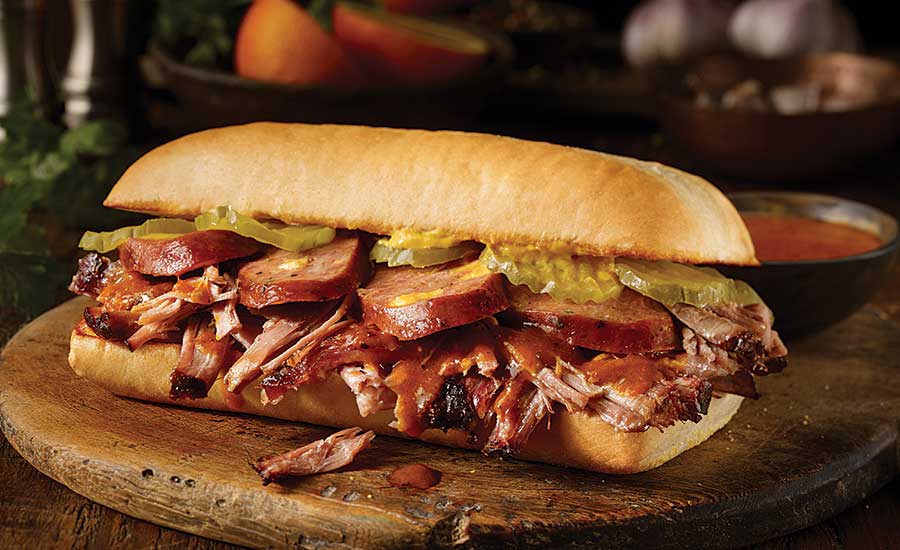 “Overall barbecue is a well-loved flavor profile that allows for making basically any new item more approachable, so we see it paired with all trending formats including bowls and tacos,” she says.

In addition to trending bowls and tacos, barbecue is being used in new applications, including mac and cheese, Conaghan says. For example, more barbecue turkey-based appetizers are appearing, including soups, stews, chills, nachos, quesadillas and sliders.

Conaghan also expects interest in regional styles will likely continue to rise. “This is an approachable way for consumers to feel experimental,” she says. “… Clearly pulled pork and brisket will still remain favorites as well as chicken paired with barbecue sauce, but usage of barbecue sauce with plant-based proteins can make these less meaty things feel more familiar, and we are already starting to see this happen.” 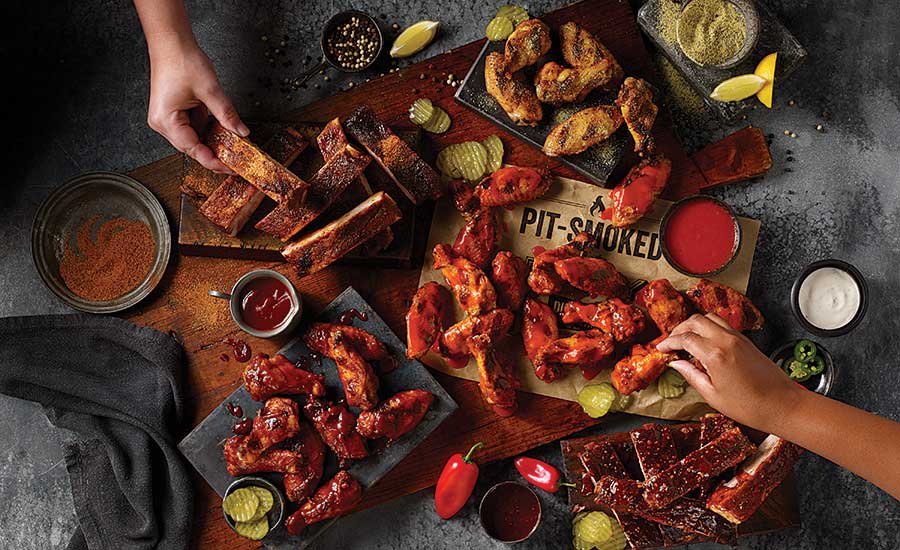 As a Texas barbecue operator, brisket remains the big seller for Dickey’s. The chain continues to innovate, though, with two new sandwiches, the ’Cueban, a citrus pulled pork with jalapeno cheddar sausage, mustard and pickles, along with the Double Dip, sliced smoked brisket, caramelized smoked onions, cheddar cheese and a smoked beef au jus. Additionally, Dickey’s is offering burnt ends in targeted markets and a Texas-style chili featuring its chopped smoked brisket.

Mills thinks more innovation will continue in terms of flavors and cuts of meat from restaurants featuring barbecue this year. In order to keep barbecue growing, she says restaurant operators must focus on innovation and the quality of meat, particularly highlighting sustainability or barbecue free from antibiotics, hormones and artificial ingredients. 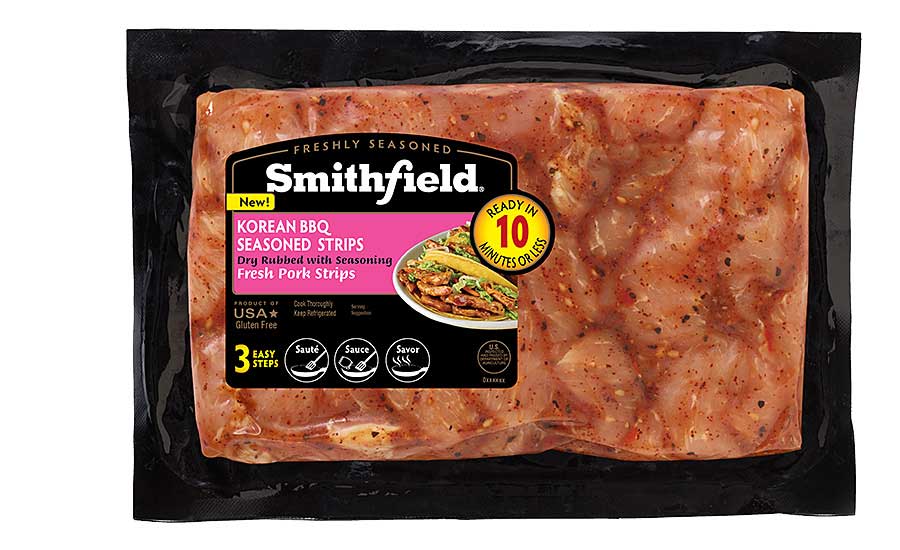 Several trends are affecting barbecue pork consumption, including a renaissance of classic Southern cookery and flavors along with craft barbecue, says James Murray, world certified executive chef and national channel accounts and innovation manager for the National Pork Board (NPB), in Cambridge, Wis. In turn, a comeback of whole-hog cooking is occurring in places such as the Carolinas and Tennessee. Chefs also are experimenting with what was traditionally prepared in an oven and doing it on a smoker.

“Consumers continue to treat pork as a staple in their diet, preferring grilled, barbecued and smoked preparations, and looking to see more ribs on menus,” says Laura Pall, brand manager for Smithfield Foods, in Smithfield, Va. “Due to cultural influences and diverse flavor trends, consumers are calling for a greater variety of options when it comes to barbecue.”

Barbecue competition events and shows continue to rise in popularity, helping barbecue become more mainstream as well. “As a result, consumers are familiarizing themselves more with competition-style cuts, including pork shoulder and pork ribs,” Pall says.

In regard to pork cuts that are growing in their use in barbecue, pork collar — a long-cut pork butt that is boneless and can be cooked whole or cut into steaks — has been popular, Murray says. Also growing: pork belly burnt ends, which takes a classic Kansas City brisket preparation method and applies it to pork belly; bone-in pork belly roasts and/or chops, which are smoked and can be carved to order; and smoked bone-in Frenched pork belly chops that can be individually smoked. Additionally, pork cheeks are being smoked until fork tender. As for more obscure pork cuts, more pork stomach, which in Mexico is called “buche” and Cajun Country called “Ponce,” stuffed with sausage and smoked until tender, is appearing.

Boned/rolled and tied fresh hams also are being smoked to create a lean pulled pork as a healthier option, Murray says. Several shareable chops are appearing too, such as Mexican Kan Kan Chop, Triple Bone Chop and Tomahawk Chop. Loin chops, with long rib bone attached, may also include the belly attached as well, Murray says. 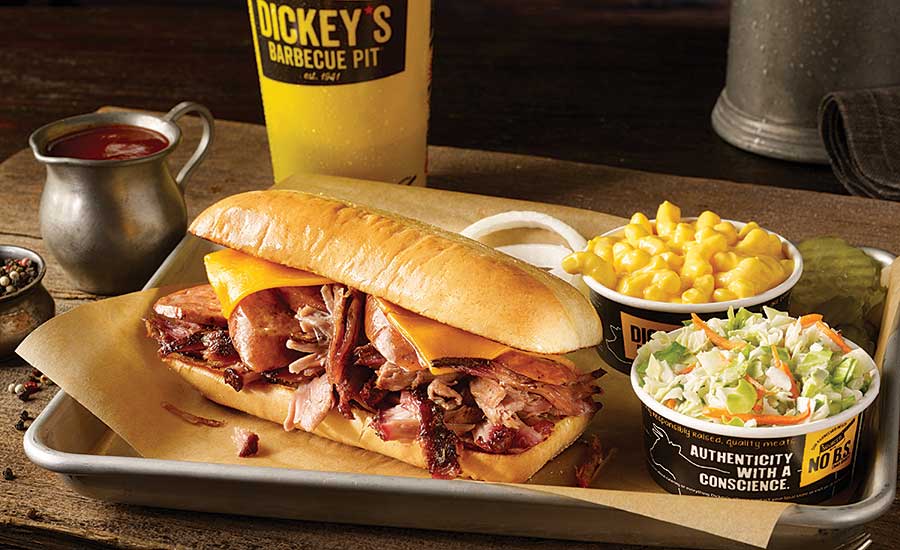 For retail, Carl Buddig and Co., in Homewood, Ill., is expanding its Kingsford line of ribs and barbecue this spring. The items include four Combo Platters that will come in various three meat and two meat combinations, featuring Kingsford Pulled Pork, Pulled Chicken, Boneless Ribs and Saint Louis Style Ribs.

Additionally, Buddig is launching two Half Slabs of ribs for smaller households, says Robert Gay, Buddig’s vice president of marketing. The Kingsford Half Slabs are available in two varieties: slathered with Kingsford signature Sweet and Smoky Kansas City Barbecue Sauce or Kingsford Center Cut Ribs that are unsauced and seasoned with its Memphis Dry Rub, so consumers can enjoy plain or add their favorite barbecue sauce.

“With consumers’ hectic schedules today they are definitely challenged to find time daily,” Gay says. “Consequently, convenience is important when they want the taste of barbecue, but don’t have the time to grill. Our Kingsford’s Sweet and Smoky Ribs are heat and serve, ready in less than 15 minutes. Plus, they’re packaged in a no-mess, oven- and grill-ready pan for easy prep and cleanup.”

Smithfield’s Marinated Fresh Pork Loin Filets and Tenderloins as well as its Dry Seasoned Pork Chops continue to be best-sellers in the category. The company recently expanded its offerings with the introduction of Smithfield Marinated Fresh Pork Strips, which come in a variety of flavors including Korean Barbecue, Sweet Teriyaki and Fajita Seasoned. “These fresh pork strips are hand-cut, pre-seasoned, and include a finishing sauce, making them perfect for quick and easy barbecue-inspired recipes,” Pall says.

For beef at retail, NCBA reports from a volume standpoint from 2016 to 2018, brisket has the most volume and volume growth, ribs have minimal growth and tri-tip is experiencing more moderate growth.

“With the introduction of more branded products to the market, i.e. Jack Daniel’s, Kingsford, Jim Beam, Sadler’s, etc., consumers are able to enjoy barbecue at any time, helping to build national interest,” NCBA’s Levine says. “For more adventurous consumers, they can even create their own barbecue beef while utilizing the variety of smoking equipment now available, i.e. pellet grills, smoke boxes, etc. We also see competitions driving trends. Consumers are exposed to a variety of cuts in barbecue competitions such as whole brisket, bone-in ribeye steaks, whole beef ribs and bone-in short ribs that they may not typically see available in the marketplace as a barbecued item.”

“Not only are consumers interested in enjoying barbecue beef, but they have the opportunity to enjoy higher graded beef products, enhancing their overall eating experience,” Levine says.

“In Texas, you’ll find that beef brisket is king,” Levine says. “In most other locations, barbecue will be pork. Some restaurants, retailers and grocers will branch out and use beef bottom round, which helps brings down costs and still produces an excellent result. You may also find barbecue made from bone-in beef short ribs, prime rib, tri tip roast or whole-beef shoulder clod. These beef cuts are not nearly as popular, but their popularity is growing. When these alternate cuts are used, they may be smoked to medium rare or medium doneness instead of the more traditional smoking to 190 degrees Fahrenheit to 205 degrees Fahrenheit, depending on how it will be used — sliced versus shredded.” 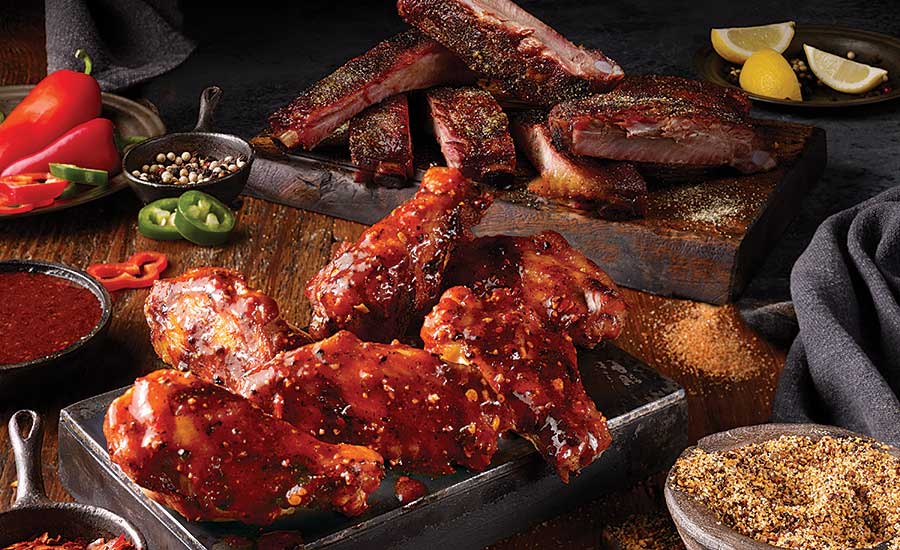 The sport of competition barbecue will continue to expand in 2020 as well, Smithfield’s Pall says, with the number of pitmasters and cook teams increasing at a rapid pace during the last decade.

“With our Smokin’ With Smithfield Committed Cooks and Grant programs and partnerships with World Champion pitmasters, we hope to continue our investment in this sport and encourage more consumers to get grilling all year long,” she says.

During the past year, turkey breast cuts have grown in popularity for barbecue competition categories and with consumers who want to fire up the grill or smoker, but get a delicious product quickly, says Beth Breeding, vice president of communications and marketing for the National Turkey Federation (NTF), in Washington, D.C.

“Whether they are boneless or bone-in turkey breasts or tenderloins, these are bigger, versatile products that give pitmasters room to experiment with various flavors, rubs and techniques,” she says.

NTF expects to see turkey’s position in the barbecue space continue to grow. In turn, NTF announced that Barbecue Hall of Famer Ray Lampe, known as Dr. BBQ, will serve as the spokeschef for NTF’s Turkey Smoke barbecue competitions this year. Dr. BBQ will be featured at events across the country talking about getting turkey on the grill or smoker and highlighting innovative recipes for every cut of turkey, including how to cook the whole bird.

Moving forward, NPB’s Murray expects a continued surge in pellet-style smoker and grills, including technology to control grills and smokers from a phone app. “These style of grills/smokers have been a gateway for people to enter the world of barbecue and grilling,” Murray says.

In addition, advancement in controlled-temperature cooking and holding equipment will continue to evolve for foodservice operators. In general, Murray anticipates the accessory industry will continue to develop better thermometers, tools and cooking apps to help to drive barbecue growth. NP