The creative side of sausage making

Smokey Denmark makes sausage so others can make memories.

Leading restaurants and grocery stores across the state of Texas get their sausages from one place: Smokey Denmark Smoked Sausage Co. The company, which has been around since 1964, has seen tremendous growth over the last decade, with an expanded retail presence and a growing list of products. How did this venerable Austin meat processor find new owners who would revitalize the business and develop a large following? Of all things, it was the Y2K bug that did it.

The Y2K bug, if you don’t remember, was the glitch that could have caused chaos in computer systems when the date switched from December 31, 1999, to January 1, 2000. It didn’t occur, thanks to the work of computer programmers, but it could have been a real problem. Smokey Denmark’s accounting software at the time had the bug, in fact. Fortunately, there were accountants in the family who were able to handle it.

At the time, the business was owned by brothers-in-law James McMurtry and Cliff Laywell, who were the father and uncle of current co-owner Melissa Pace. Her husband, Jonathan, was the accountant who migrated the company’s data to a new accounting system. As he worked on the computer systems, he observed the business. His parents owned restaurants when he was growing up, so the food business was very familiar to him.

“I was doing the year-end stuff and talking to Missy about it, and I said I’d love to be a part of this,” Jonathan recalls. “We knew her uncle wanted to retire at some point, so I had to convince Missy to buy her uncle out.”

“We were both accountants, so we really didn’t know the science or how to make sausage at all,” Melissa adds. “But it’s been a great blessing, and I’m glad you talked me into it!”

The Paces bought out Cliff Laywell in 1999 and spent the first couple of years pouring the profits back into the business, financing some equipment upgrades and business expansions. They met fellow processors from the Southwest Meat Association, and those relationships helped them gain valuable industry knowledge and connections.

“I also spent a lot of time at Texas A&M, going to their short courses in the meat science department with Dr. [Jeff] Savell, and as well as going to Iowa State for all their short courses. It really helped pull the creative side of me out to create products,” Jonathan adds.

The expansion in Smokey Denmark’s sausage products since Jonathan took over the business is testament to his creative side. When the Paces came on board, the company made three sausages – two that were created by the founder, Albert “Smokey” Denmark himself, and a hot link that was added in the 1980s. The hot link was particularly popular in the Dallas-Fort Worth Metroplex. Now, the business offers about 25 different products, including boudin, andouille, beer brats, pepperwurst, weisswurst and a British banger.

“When we first bought the company, I think we were only in barbecue restaurants,” Melissa says. “Over the years, sausage has grown to where you find it in brew pubs, and now we sell a lot of sausages for kolaches and also for pizza toppings.”

Improving the company’s equipment was a daunting challenge. Considering Smokey Denmark has pretty much maxed out its ability to expand at its current location, becoming more efficient was the key to becoming more productive.

“We had just gotten into the business, and we bought a stuffing line, and it was more than our house, and we kind of freaked out about that,” Jonathan says. “But innovation and technology, they really make your operations more efficient. When we bought that new stuffer, our culling rate went from 5 or 7 percent to maybe 1 or 2 percent. That machine paid for itself within a year, easy.” 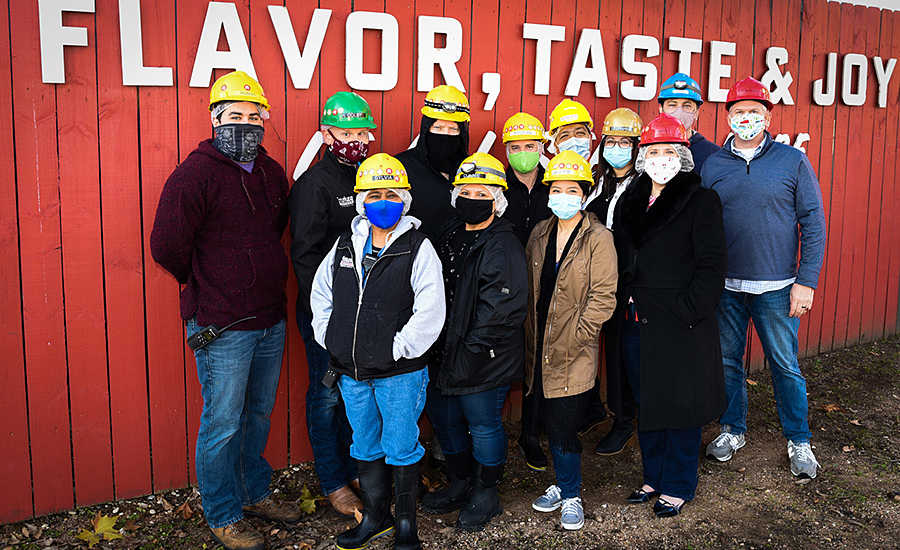 A Quest for Texas Best

When the Paces bought the business, Smokey Denmark was almost exclusively a provider of sausage to the foodservice industry. It operates a market at its plant in East Austin, but that is a small portion of the overall sales. Over the years, the Paces have expanded its retail presence, but at the start of 2020, Jonathan estimates that foodservice sales accounted for about 70 percent of the overall business.

Those sales came to a swift halt when the initial shelter-in-place orders for the COVID-19 pandemic crippled the restaurant industry. The company needed to pivot, and quickly.

At the time, Smokey Denmark had been a part of a competition held by H-E-B, one of the largest grocery store chains in the state. The “Quest for Texas Best” is a competition that seeks out some of the best products made in the Lone Star State. There were 892 entries, and Smokey Denmark’s sausage made the Top 20 and eventually got into H-E-B stores across Texas.

“A lot of times it’s hard to get into a giant grocery store chain, because there are so many products in there. But this gave us access to H-E-B,” Jonathan says. The chain initially wanted to hold off on placing new products because of COVID-19, but it became clear that the pandemic wasn’t ending anytime soon, and the store needed products for its shelves.

”It enabled us to get in at the right time,” Jonathan says. “At the time, restaurants were hurting, and grocery stores kind of exploded. That helped balance us out, keep the plant running – we were running full tilt to get product out. That was a blessing.”

He adds that most restaurants in Texas are able to operate in some sort of capacity now. Between the recovering foodservice industry and the additional retail business, Smokey Denmark is well-suited to have an excellent 2021. 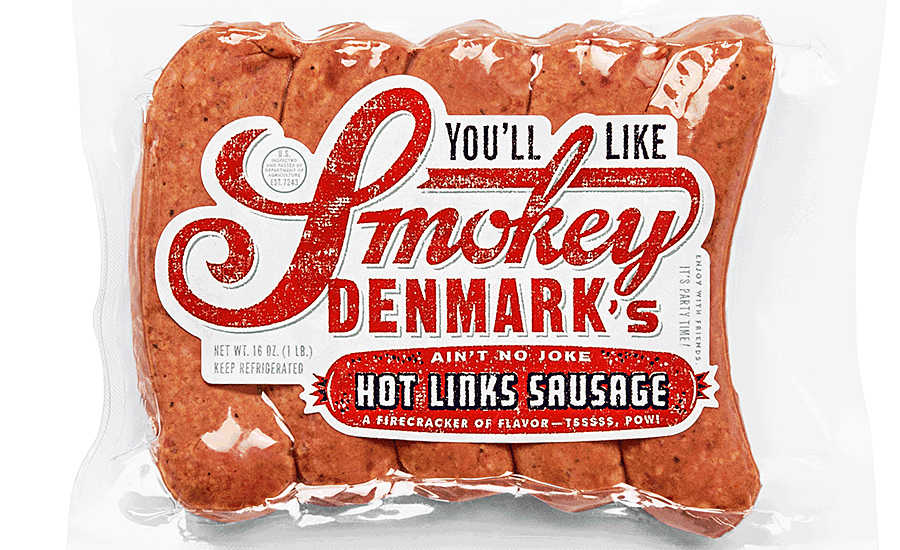 Last Thanksgiving, when COVID prevented many large-scale family get-togethers, Smokey-Denmark decided to reinvent the holiday experience with a Thanksgiving sausage. It tasted like turkey, dressing and cranberries, Jonathan said. The profits made from that product were all donated to Feeding Texas, an organization dedicated to hunger relief. Similarly, Smokey Denmark offered a Tamale Sausage during the Christmas season, as a nod to the Texas tradition of eating tamales on Christmas Eve.

“That’s the fun part of sausage making. It’s a craft,” he says. “Sausage making is a fun thing to do, and it’s been successful and rewarding.

“Everybody makes memories around food — a family gathering, high school graduations, or even when you have a funeral, you’re around food. What we enjoy about this business is that we get to [be a part of] that,” he adds.

While they have been strengthening Smokey Denmark’s infrastructure, Jonathan and Melissa also have been working hard to strengthen the company’s internal relationships as well. Their philosophy is that the business is a company of owners, where all of the company’s 25-plus employees take pride in their job, respect the customer and co-workers and be concerned about the bottom line.

The Paces have radically changed their hiring process over the years, when a high turnover rate became a source of concern. Rather than hire people after a cursory interview, they have extended the process to several stages, including a phone interview, an in-person interview with the team leads and lunch or dinner with the Paces.

“The process is a lot longer, but our turnover rate is almost zero now,” Melissa says.

The other benefit is that Smokey Denmark has become an employer of choice, with employees recommending friends or family for available jobs. The Paces have worked to make the workplace more like a family atmosphere. Prior to COVID, they were bringing in a teacher to give English classes to some of their employees from Myanmar. The interest in employees also speaks to another core value, which is that everyone is in this together.

“Every company meeting that we have, we emphasize those core values and that people make memories with food. It’s not just about finishing the batch or putting it in the box. We’re doing this to help a mother put dinner on the table for their kids. It gives them a lot of pride and satisfaction in the jobs that they hold. At bigger places, it could be just another cog in a wheel, but I don’t think people see themselves like that here,” Melissa says.

That personal experience is one of the reasons that Smokey Denmark retains its market. Though it is a small portion of the company’s sales, it attracts steady business from the company’s neighbors in Austin. Even family members of “Smokey” Denmark return to stock up on sausage.

“We really like having that meat market, because it allows us to connect with our customers,” she says.

Smokey Denmark still operates out of the facility that Mr. Denmark himself opened in 1969 after outgrowing his first location. Jonathan calls it the “little engine that could,” as it produces a large amount of sausage in a relatively small space. He has been looking at ways to increase productivity, such as bringing in intensified chilling systems to replace chilling rooms. The pandemic has forced the company to delay some of its capital expenditures, but Smokey Denmark is still in growth mode.

“Our plan is to grow and build another facility that can allow us to continue to grow and expand in Texas,” Jonathan says. IP