This website requires certain cookies to work and uses other cookies to help you have the best experience. By visiting this website, certain cookies have already been set, which you may delete and block. By closing this message or continuing to use our site, you agree to the use of cookies. Visit our updated privacy and cookie policy to learn more.
Home » End-point temperature and variability in pork and beef cooked to varying degrees of doneness using two different cooking methods
BeefPork

Grilling is a commonly accepted cooking method used in meat quality research due to its short cooking time and affordability. However, grilling presents a number of challenges to ensure accurate and precise end-point temperatures, even when executed well. When monitoring internal temperature, the end-point temperature is dependent on correct thermometer placement. Even then, differences in temperature may be observed within a chop depending on probe location, or between chops depending on the presence of the grill’s hot and cold spots. It is also imperative to pay close attention during grilling to avoid meat overcooking.

Sous vide is a cooking method where cuts are submerged completely underwater, allowing them to be cooked evenly. Because the end-point temperature of cuts cannot rise above the set water temperature, samples prepared using sous vide cannot be overcooked. This also allows for the convenience of not having to monitor cuts closely during the cooking process. All of this likely results in reduced external variability and greater accuracy in analyses.

The objective of our work was to determine the end-point temperature and Warner-Bratzler shear force (WBSF) variability differences in pork and beef cooked to varying degrees of doneness using grilling and sous vide. Ten beef semitendinosus muscles were cut into four 2.54 cm steaks (N = 40) and aged for 21 days. Beginning at the 10th rib, 51 pork loins were cut into four 2.54 cm chops (N = 204) and aged for seven days. Steaks and chops were randomly allocated within the whole muscle to four treatments: grilled or sous vide to 63°C, or, grilled or sous vide to 71°C. After cooking, regardless of the applied method, two handheld thermometers were inserted into either side of the cut to determine the actual final temperature. Cuts were cooled to room temperature before four cores were removed parallel to the muscle fiber and evaluated for WBSF. One of the objectives was to measure accuracy and precision within end-point temperature and tenderness. Temperature accuracy was defined as how close thermometer readings were to the targeted cooked temperature (63 or 71°C). Temperature precision was defined as how similar two thermometer readings, within a single cut, were to each other. WBSF accuracy was defined as how close individual core values were to the cut average. WBSF precision was defined as how similar individual core values were to each other. 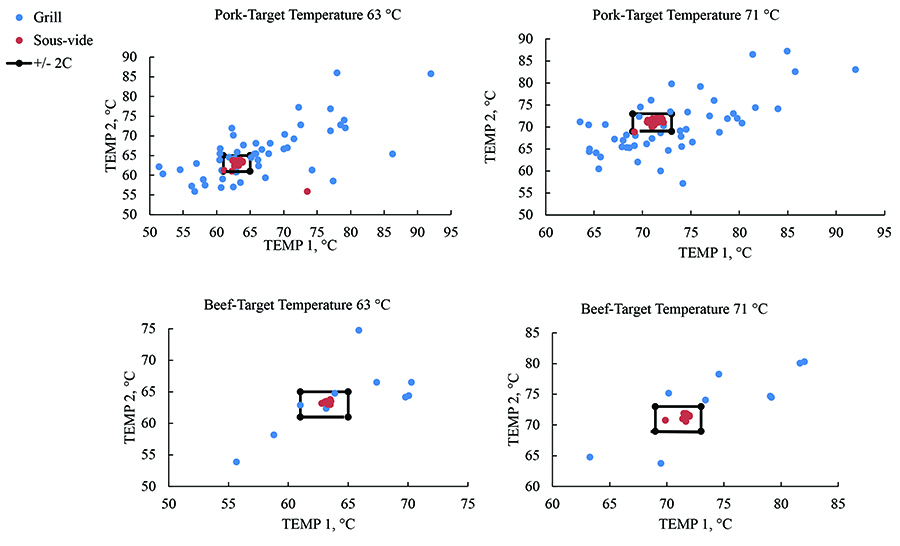 2Difference between WBSF maximum and minimum value within a cut