How should processors deal with allegations that mechanically tenderized beef is unsafe? 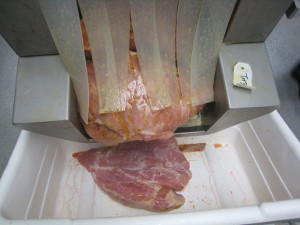 It doesn’t appear that severe just yet, but after a series of articles by the Kansas City Star news organization that examine the beef industry — and concerns that injection and tenderization systems contaminate the interior surfaces of raw whole-muscle products — processors would be wise to educate the public on their practices and, as always, look for new food-safety improvements.

“The scientific evidence indicates that interior contamination by injection or tenderization is pretty limited, but a very low level is possible,” says Joseph G. Sebranek, Ph.D., Distinguished Professor of Animal Science, Iowa State University, Ames, Iowa. “However, public perceptions are easily affected by the descriptions in stories such as this.”

General-purpose injection systems, in fact, allow processors to inject multiple types of products, such as bone-in and/or boneless with high or low profiles, says Wes Osburn, Ph.D., associate professor of meat science at Texas A&M University, College Station, Texas, “using only one system with the capability to minimize process variation — the over or under pumping of product.”

These systems allow an operator to accurately set the injection levels required for a product and then fine-tune the system during the injection process.

“Conversely, these controls can also ‘lock out’ or restrict an operator’s ability to make adjustments during the injection process, if desired, to minimize product variation,” Osburn says.

And as processors today try to increase the tenderness and juiciness of some beef cuts, some are blade tenderizing or enhancing beef cuts by injecting solutions into the cuts, says Lynn Knipe, Ph.D., extension processed meats specialist, The Ohio State University, in Columbus, Ohio — a situation that is the potential source of concern.

“Either treatment has the potential of translocating surface contamination of E. coli and STEC to the interior of beef cuts,” says Knipe.

As a result, some consumer groups are lobbying the government to mandate the labeling of these products, so consumers know which cuts need to be cooked to a minimum of 160°F to eliminate any potential E. coli.

According to Knipe though, instead of relying on consumers and chefs to cook product to a certain temperature due to its label, the USDA and FSIS has traditionally stated non-intact beef products should be processed with no surface contamination that could be transferred to the center of the beef cuts.

“Antimicrobial interventions, which decontaminate intact beef product surfaces, are important prior to blade tenderization or injection of solutions into beef cuts,” he says.

Traditionally, processors have relied on lactic acid, acetic acid or diacetate, amongst others, for surface treatments of beef carcasses and cuts, which are effective when used, he says.

“More recently, many new compounds have been evaluated for their effectiveness in eliminating E. coli O157:H7 and STEC at Oklahoma State University and Texas Tech University,” he says, adding that another intervention strategy is to continuously rinse tenderizing blades or injection needles with antimicrobial agents during processing to minimize cross-contamination. Equipment has been designed and manufactured for better and easier sanitation, adds Sebranek.

“[This] contributes significantly to the overall improvement in sanitation and control of contamination that the industry has achieved,” he notes. As equipment can still contain harbor sites for bacteria — and some are designed better than others — processors should recognize the remaining contamination risks and incorporate this mindset into their cleaning and food safety process, notes Sindelar.

Research has also resulted in the development of antimicrobials for incorporation into or on the surface of edible films and packaging, says Osburn.

“Perhaps future advancements could lead to a surface coating or incorporation of antimicrobials or bacteriostatic compounds on the surface of or within materials used to construct future injection systems — the needles, brine tanks, belts, piping, etc. — to enhance food safety,” he says.

Osburn points out that other methods to reduce product contamination during the injection process are improvements in brine chilling, brine filtering (both initial brine and return brine) to minimize protein particulates that can clog needles and/or cause microbial growth, needle cleaning and equipment disassembly and cleanup, clean-in-place systems and sanitary materials used for equipment construction.

“Sanitary construction, brine temperature control and effective cleaning systems are still critical to reduce or eliminate the occurrence of microbial biofilms that could contaminate injected products,” he says.

Continued research and development is ongoing to address these issues, particularly with respect to minimizing injection variation and improving product safety.

“As raw materials change, the ability of technology has to change, because some of the changes we’re seeing in raw meat, such as softer fat and quality-related challenges, are not positive,” says Sindelar. “So the technology has to adapt to that, whether that means how the technology is performed — for example, using slower speeds and less pressure — or through a reinvention of the existing technology itself.”