This website requires certain cookies to work and uses other cookies to help you have the best experience. By visiting this website, certain cookies have already been set, which you may delete and block. By closing this message or continuing to use our site, you agree to the use of cookies. Visit our updated privacy and cookie policy to learn more.
Home » Robotics and Automation: Back to the future
Meat and Poultry ProcessingPlant Design/Management
Tech | Processing

Robotics and Automation: Back to the future

The novel coronavirus disease (COVID-19) has allowed many professions to rethink how they do business, including meat and poultry processing plants. Increased automation and robotics allow plants to continue operations, while limiting the risk of infecting workers — or animals.

“What COVID-19 revealed is that our food supply chain was most vulnerable to human-spread pandemics where reliance on labor was most acute, and it makes sense to explore options to reduce labor density should we face similar problems in the future,” says Jayson Lusk, Ph.D, distinguished professor and head of the department of agricultural economics at Purdue University, in Lafayette, Ind.

Traditionally, the main benefit from automation is to help relieve pressures related to labor, Lusk says. “Before COVID-19, the unemployment rate was very low and a major challenge was finding enough qualified workers to run near capacity,” he says.

Now, more automation has the potential to reduce direct labor costs in addition to labor-related costs if worker safety is improved.

“It is already the case that many meat packing plants use automated quality grading systems, and one can imagine these and other quality assurance systems being integrated into a cohesive automated system,” says Lusk. “Of course, it should be noted that automation isn’t free, and it is difficult in meat packing plants that involve animals of different shapes, sizes and colors.”

Robotics was already becoming more common in meat and poultry processing plants, because they have become much cheaper than just five to 10 years ago, they are simpler to operate and their vision technology has vastly improved.

Collaborative robots, or cobots, are now designed to directly interact with human employees in a shared space. “Collaborative robots, for example, in theory don’t require as much guarding and safety barriers, so they take up less space and provide more flexibility,” says John R. Henry, the Changeover Wizard at Changeover.com, a consulting firm that looks for and solves inefficiencies in packaging operations.

In the past, robots that had a 10-foot reach needed a safety barrier so they didn’t accidentally hit a worker. Plus, because they are usually employed for palletizing, they would need a guard and more services when they were portable, Henry says.

Besides being safer co-workers, robots also now have better intelligence and vision software.

“Vision technology has been the big driver, however, for increased robots,” Henry says. “Before, robots could go to the exact, required location, pick up an item like sausages and put them on the thermal tray — as long as everything was placed exactly right. Now, their advanced cameras help them ‘see’ the item, orient themselves, pick it up correctly and put it on the tray. Some can even do this very quickly.”

A robot can pick up 200 sausages a minute off a conveyor belt compared with one employee picking up 30 to 40 sausages per minute, Henry says.

“Also, a couple robots can do this all day long with no breaks, because of their improved vision technology,” says Henry. “Whereas, two to eight people would have to pick up and put sausages on thermoform trays.”

Other robots have X-ray vision in addition to their vision software. “Now, some robots can locate and hit 10 to 20 lamb carcass ribs in a minute, which used to be challenging for them to find,” Henry says. 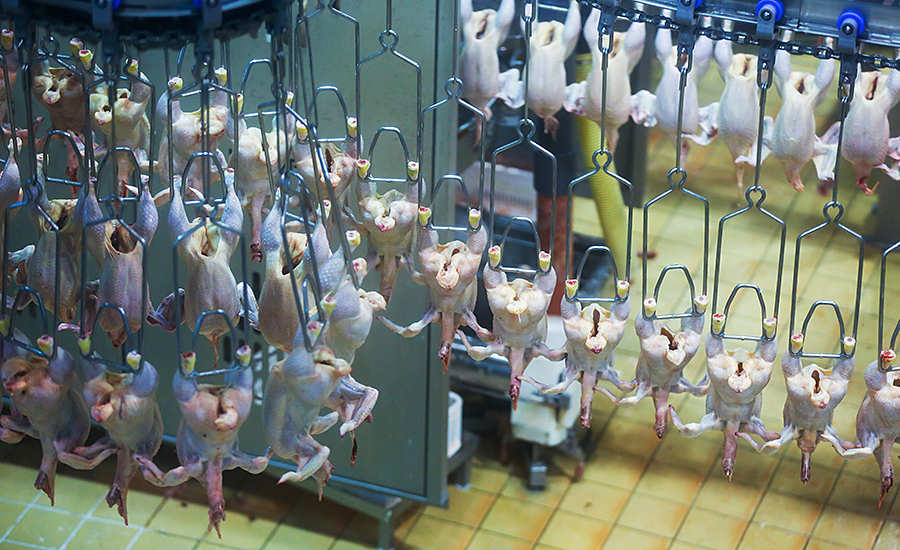 The cost to operate robots — their maintenance, programming and operations — has also gone down dramatically, so it’s now more efficient for them to replace workers at a time when employees can be hard to find.

“Manufacturers can’t find unskilled labor to do this work for $10 to $14 an hour,” Henry says.

Certainly, cutting animal carcasses sounds like dangerous work. But picking up cases from a conveyor and stacking them on a pallet all day every day can result in injuries, as well, but from the chronic, repetitive motion of lifting 10 pounds to 15 pounds thousands of times a day.

Lower costs for end-of-arm tooling have also benefitted plants. Before, these tools were custom made for each plant’s operations. A robot could cost $40,000, but its custom arm could run another $50,000, Henry says.

“Now multiple, standard end-of-arm models exist that can pick anything, and they are a lot more available,” he says. “Their tool is almost like a hand of soft rubber, and can open like a flower petal and remain soft while grabbing product.”

These tech advances make it easier for robots to handle increased variability in products, which gives them an advantage over automated machines. Also, they can easily be repurposed compared with custom-built machines, Henry says.

“My thinking is that manufacturers should start with robots and figure out what can be built around them, rather than end with robots,” he says. “It could be that the plant just needs a robot and a pump, for example, vs. six custom machines.”

Automated machines, however, excel at doing the same thing at high speeds. But an automated machine needs to be designed, built, installed and finely tuned before its first day. “Robots are essentially off the shelf and can be delivered within days,” Henry says. “Since robots are more economical, plants could instead just add more of them, rather than invest in custom automation.” 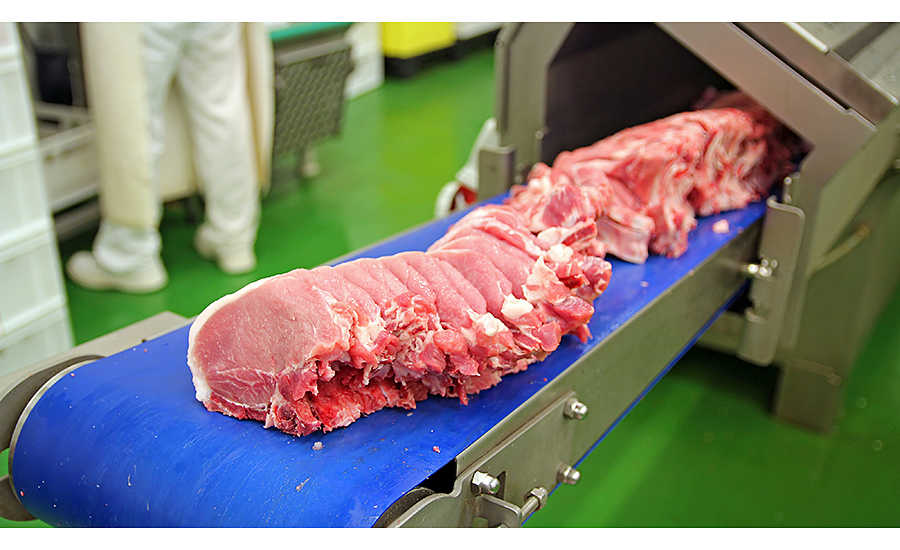 Not every robot needs a big warehouse or processing space to operate. Some are also perfectly fine in a chicken coop, for example.

For years, Atlanta-based Georgia Tech Research Institute’s (GTRI) researchers have experimented with creating robots that can take care of poultry flocks, so human workers don’t contaminate or introduce disease to commercial poultry houses. The robots are meant to monitor the flock, encourage movement and disinfect facilities. But humans were still needed to pick up eggs from the floor and remove mortality. Now, GTRI is testing robots’ ability to pick up eggs and mortality from the floor.

“Any automated system takes the worker out of the process,” says Colin Usher, research scientist at GTRI. “Aside from COVID-19, our original intent was to look at replacing workers because these jobs are so manually intensive and repetitive, and to utilize robotics to prevent disease outbreaks.”

Poultry processing plants have been experimenting with robotics for deboning, as well, which is the busiest, most labor-intensive procedure. It’s also impossible to do with social distancing, Usher says.

This spring, GTRI was slated to do significant field testing, which has been put on hold for now because of COVID-19. The team was going to test the robots’ ability to pick up 10-pound chickens with its recently fine-tuned arm. “We are polishing how robots can detect and remove mortality,” Usher says.

To help, robots now have panoramic, 360-degree cameras to look anywhere in poultry houses. In addition, they can be operated remotely from anywhere from a tablet or high-tech goggles, says Usher.

“Remote operations require ultrasonic beacons in the robots — which are about $2,000 — to operate in the poultry house,” Usher says. “We’re looking to see if we can perform without beacons, so the robots won’t have a challenging set up and can be as simple to turn on for the first time as a Roomba.”

The GTRI project is entering what it hopes is its final testing phase, says Usher. “We’ve had a lot of interest from processors, coupled with a lot of skepticism,” he says. “The environment of poultry houses is dusty, full of ammonia and not ideal for electronic systems. So, we have to overcome that hurdle by convincing farmers there’s value to robotics.”

The answer? Robotics enables farmers to decrease labor and increase management. “We thought labor would be driving the project for us, but instead we wound up gravitating to the possibility of better management and decreased risk of disease,” says Usher.

Even though robots’ prices have decreased in general, some companies are discussing with GTRI the possibility of leasing a robot or paying a la carte for the actions the robot completes, such as picking up eggs or mortality from the floor.

In current conditions, humans are the riskier investment compared to robots.

“The idea is simple,” says Usher. “People are the vector for introducing disease and should be removed or mitigated as much as we can.” NP

Update on the transition toward robotics, automation in meat and poultry plants

The ongoing trend of robotics and automation in the packaging industry

Syntegon to showcase robotics and automation solutions at PACK EXPO 2021

Food Plant of the Future: Surviving and Thriving with Automation