Special Report | State of the Industry 2020

The state of sustainability in 2020: eco-friendly becomes a force

Sustainability is an increasingly powerful meat and poultry sales trigger.

More consumers are seeking data on raising animals and the subsequent effect on the environment when making protein selections. And that is causing a growing number of companies in the supply chain to leverage eco-friendly practices.

“Shopper demands are having a powerful impact in driving sustainability in the meat and poultry sector,” says Eric Mittenthal, vice president of sustainability for the Washington, D.C.-based North American Meat Institute (NAMI). “There is a clear mandate from consumers that they expect our industry to be more environmentally sustainable and to reduce our overall impact on the planet and the climate. As a result, we are going to need more of the industry to make investments in improving their environmental impact.”


Watch the 2020 State of the Industry Webinar
Register for free today!

NAMI moving from being a member- to a consumer-focused operation is emphasizing sustainability, Mittenthal says. “Our members are going to have to adjust their business practices in accordance with consumer expectations,” he says. “It is going to take a lot of work because there are many upfront costs to making improvements and companies are in different place on the sustainability spectrum.”

Shopper research, meanwhile, reveals rising interest in making better-for-the-planet buying decisions. “Flexitarians and others looking to reduce their meat and poultry consumption cite the impact of animal agriculture on the environment as one of the chief reasons for wanting to cut back on animal protein,” according to The Power of Meat 2020 report. “Instead, they purchase plant-based meat alternatives as they perceive these to have a smaller environmental impact.”

The availability of easily understood and unbiased sustainability information, meanwhile, will be a key tool in combatting incorrect assumptions about the negative impact of animal agriculture, the report shows.

“Addressing shoppers’ environmental concerns can be done through education on animal agriculture’s true impact on the environment, but also through packaging improvements aimed at reducing the use of plastic as well as longer shelf-life for waste reduction,” according to the report. The Power of Meat 2020 was prepared by 210 Analytics, a San Antonio, Texas-based market research and marketing strategies firm, and published by the Arlington, Va.-based Food Marketing Institute and the Washington, D.C.-based Foundation for Meat and Poultry Research and Education.

Change is a constant

Most meat and poultry segments, meanwhile, are making strong sustainability inroads. The Washington, D.C.-based National Chicken Council (NCC), for instance, reports that compared with 1965, today’s chicken production is 50 percent less harmful to the environment with poultry production requiring 75 percent fewer resources and experiencing a 36 percent reduction in greenhouse gas emissions; a 72 percent decrease in farm land use; and a 58 percent decline in water use.

“Bringing about change in the beef industry means trying to influence a loose organization of individuals and companies that operate in a variety of different conditions across the world. This is not a straight-forward process.”
— Nicole Johnson-Hoffman, OSI Group

Technological advancements and improvements in animal husbandry practices are helping to trigger such results, the NCC reports. That includes the use of computer systems in grow-out houses that measure and monitor water use and leveraging nipple watering systems which only release water when birds press a pin. The systems limit spillage and just dispense water when birds want to drink.

Many farmers also are recycling poultry litter — a mix of manure, spilled feed, feathers and material for bedding in the houses — for use as an organic fertilizer for crops, and planting vegetative buffers between chicken houses helps absorb water, dust and emissions.

The use of chicken feed, the largest source of water consumption in chicken production, also is declining, the NCC notes. It now takes about 1.8 pounds of feed, primarily consisting of corn and soybean meal, to produce one pound of chicken, down from 2.4 pounds of feed 50 years ago, the NCC report shows. The NCC attributes the decrease to the manufacture of more nutritious feed that growers tailor to each stage of a chicken’s life and better living conditions, helped in part by climate-controlled barns.

In addition, most chicken farmers are switching to LED lighting, which can result in energy savings of 80 to 85 percent versus incandescent lightbulbs, and using sophisticated computers on grow-out houses that make continuous changes to temperature and ventilation to maintain optimal environmental conditions for the chickens while saving gas and electricity, the NCC reports. “Sustainability is a never-ending journey of continuous improvement,” says Paul Bredwell, executive vice president of regulatory programs for the Tucker, Ga.-based U.S. Poultry and Egg Association.

Finite resources will compel the poultry and egg industry to produce more food in a socially responsible way, says Denise Heard, U.S. Poultry and Egg Association director of research. A challenge, however, is getting all industry operators to collaborate on such efforts, she says.

“Poultry producers have the best understanding of how to raise their birds, but we need to do a better good job as an industry of communicating our story in a transparent way,” Heard says. “Collaboration and communication across the entire value chain will drive improvement, but the relationships and trust necessary to affect change will take time to develop.”

Finances are a factor

Monetary issues, meanwhile, are another major impediment to greater adoption of sustainable measures, Heard says. “While technological advancements and research coming from academia will help us find new and efficient methods of production, we cannot expect a critical link in the value chain to sacrifice its financial sustainability.”

Getting meat and poultry producers to retain their focus on eco-measures when dealing with profitability matters is also a challenge for the pork sector, says Brett Kaysen, vice president of sustainability for the National Pork Board, based in Des Moines. “Soybean and corn prices are rising along with a reduction in pig prices,” he says. “Thinking about the future is harder if I’m losing money every day and just trying to get through tomorrow. The depressed economics of the pork industry is an obstacle to getting sustainable practices to move further and faster.”

Nevertheless, he notes that more pig producers are growing corn and soybeans for the animals’ diets and using the pigs’ manure to enhance soil health in lieu of commercial fertilizers. “A lot of petroleum-based fossil fuel energy goes into producing fertilizer and that expands the carbon footprint,” Kaysen says. “Pig manure also increases the organic matter of the soil quicker than commercial fertilizers as well as the soil water-holding capacity, which enables the raising of more bushels of corn and soybeans per acre.”

Investment expenses also can make it difficult for beef sector operators to adopt more sustainable practices, says Ashley McDonald, executive director of the Centennial, Colo.-based U.S. Roundtable for Sustainable Beef and senior director for sustainability for the National Cattlemen’s Beef Association (NCBA). She notes that because margins are tight and live cattle prices are plummeting, “it can be difficult to find resources to try out new practices when you are losing money.” 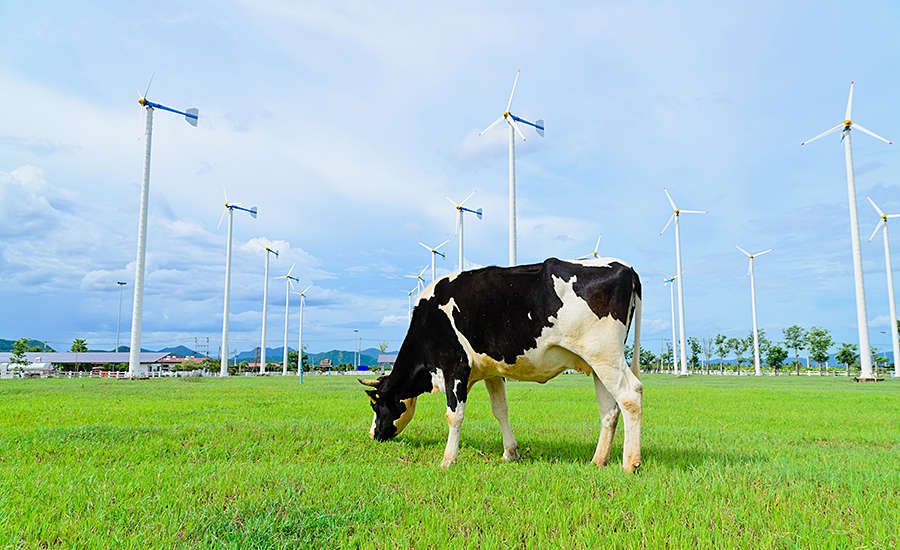 A boost for business

Beatty Canyon Ranch — a Kim, Colo.-based cow and calf developer — is focusing on biodiversity with plant species as it works to extend the growing season and store more carbon in the soil while reducing greenhouse gas emissions with higher quality forages, says Steve Wooten, president. He notes that such efforts are profit driven, “but also part of social and conscious awareness. If you are not taking care of the land or the water, you are probably on the road to being out of business.”

Leveraging sustainable practices such as reducing greenhouse gas emissions and saving energy also is a way to stand out in the hyper-competitive animal feed business, says Scott Anderson, operations manager for CRI Feeders, a Guymon, Okla.-based cattle feeding operation. “The science will continue to evolve and there will be enhanced means to track and measure what is happening,” Anderson says. “We will learn from that and continue to adjust and improve.”

“Sustainability issues are prioritized because they are important to our businesses, but they do not exist within a vacuum and many times they need systemwide answers and partnerships,” Johnson-Hoffman says. “Bringing about change in the beef industry means trying to influence a loose organization of individuals and companies that operate in a variety of different conditions across the world. This is not a straight-forward process.”

She says there is no single way to raise cattle sustainably and “any change we request requires careful consideration for small family farmers rightfully concerned about making a living off their land and protecting their families’ inheritance for years to come. The words of a large organization and those that sit in an office do not mean much on the farm if there is not something that also benefits them.” NP