The snack market is sizzling.

Sales are on the upswing as consumers look for products that meet their indulgent, nutritional and emotional needs, and meat and poultry selections are an increasingly popular part of the mix, according to Mintel Group, a Chicago-based global market research firm.

Mintel adds that pork rinds, while a small segment of the snack market, “found success through the back door of the protein trend — low or no carb. Brands are hitching their wagon to on-trend specialty diets like Keto and Paleo. Success in the segment ignited the emergence of new brands in the market.” 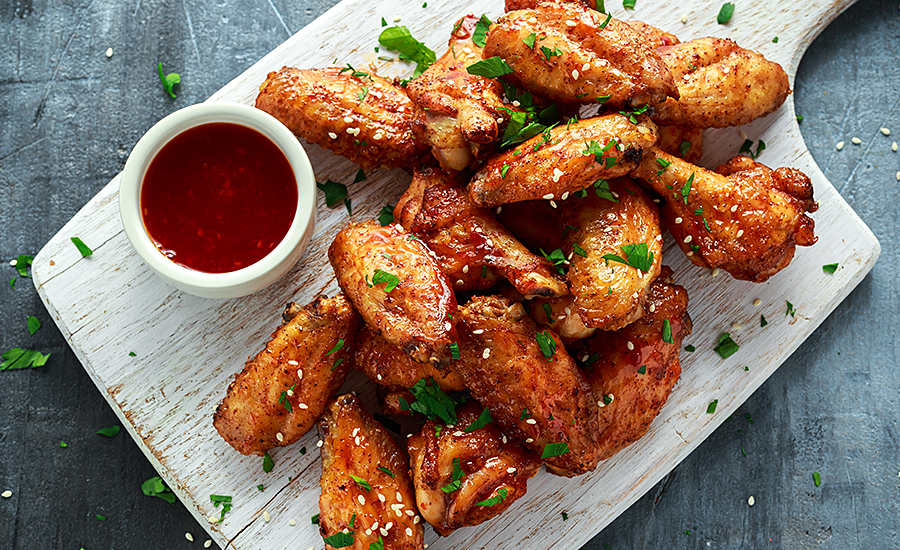 Suppliers are responding to growing base of consumers seeking innovative meat snacks by launching a plethora of products consisting of different brands, proteins and flavors along with  health-oriented claims, diet-specific selections, functional packaging, blends of meat and vegetables and plant-based items, says Anne-Marie Roerink, president of 210 Analytics, a San Antonio-based market research and marketing strategies firm.

“That is leading to a sizeable meat section in the snack aisle and an ever-growing presence of meat snacks at the front end of supermarkets, which is the most desirable merchandising space in the store,” she says.

Both legacy and startup brands are driving innovation and broadening the audience for meat snacks, Roerink says.

“A dedicated organic shopper wouldn’t have been in the meat snack segment 10 years ago, but today there is a wide array of grass-fed, organic and no-antibiotics-ever products with a very clear health positioning,” she says. Roerink notes some offerings are intended to be part of the high-fat, low-carbohydrate Keto diet and the Paleo diet, which consists chiefly of meat, fish, vegetables and fruit.

“Much like the meat department, different brands and types appeal to different shoppers, and retailers will need to closely match their assortments to their shopper audience,” Roerink says. 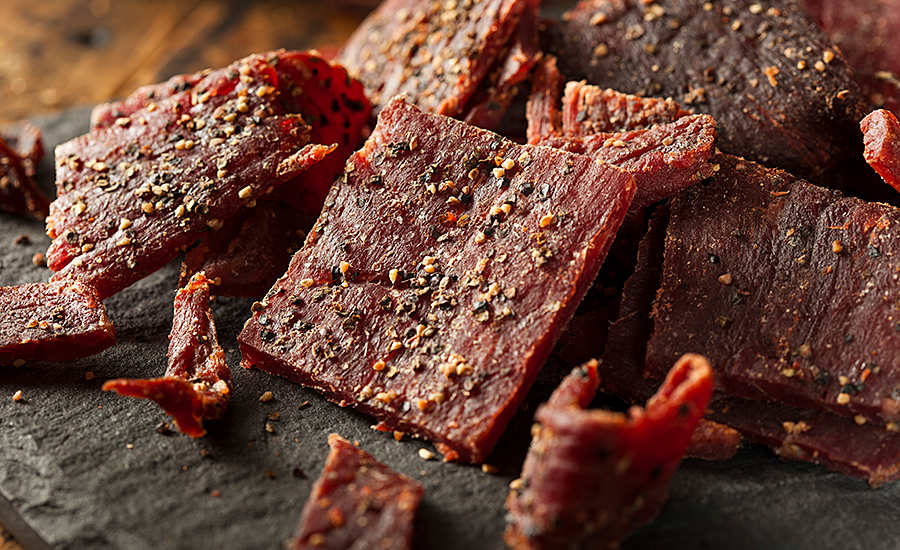 To stand out from competitors, it is important for supermarkets to position themselves as the “snack hub” for consumers, with meat snacks part of the set, says Sally Lyons Wyatt, IRI executive vice president and practice leader.

“Even with the majority of Americans not as ‘on the go’ as before the COVID-19 restrictions, meat snacks are attracting more shoppers and generating greater sales in 2020,” she says. “This makes the category a must-have for the supermarket channel.”

Protein snacks, meanwhile, are available in a wider range of varieties, Lyons Wyatt says. She says there are more selections of chicken, turkey, bison, venison and salmon, along with additional plant-based and health-oriented types in different forms, including strips, bites, cuts, chips and bars.

Such selections as elk and low- or no-sugar options also are emerging, as are single-serve bacon snacks and blended items which might combine animal proteins and vegetables to create better-for-you alternatives, Roerink says. 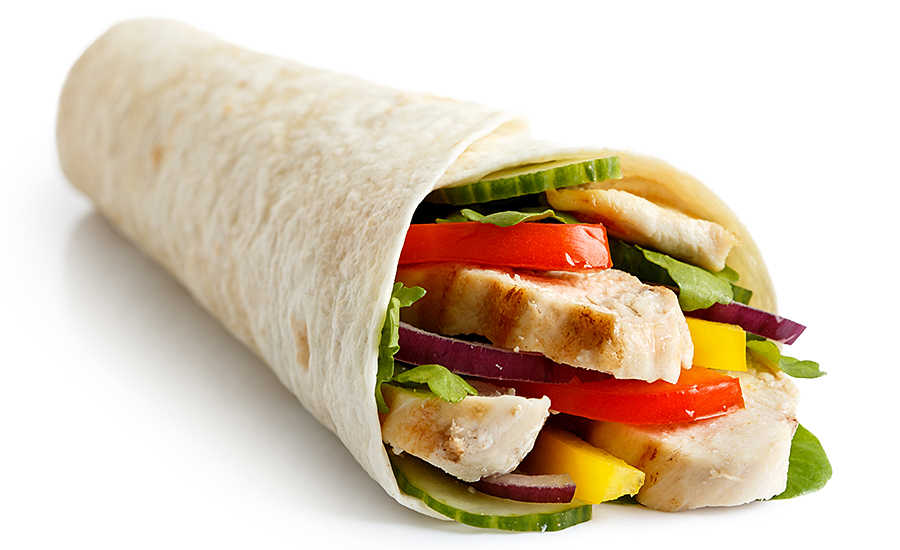 A transformation for chicken snacks

Poultry merchandisers, meanwhile, are testing new snack-oriented varieties of chicken bites, chicken poppers and chicken popcorn that are available in an array of flavors and packaging and feature different vegetables, says Tom Super, senior vice president of the Washington, D.C.-based National Chicken Council. “A good number of these products will prove successful, especially because the stay-at-home crowd during the COVID-19 pandemic is tiring of the same food alternatives and are most receptive to new tastes,” he says.

Chicken roll-ups also have great snacking potential, Super says. He notes the roll-ups — which traditionally consist of ham, cheese and other compatible ingredients — can contain thinly sliced chicken breast or thigh meat along with cheeses and vegetables which consumers can eat cold, hot, as a handheld or in a wrap.

“Increased eating occasions between mealtimes has brought new meaning to snacks,” Super addssays, adding that more consumers anticipate the need for mini meals or snacks by cooking extra pieces of chicken with their regular meals for planned leftovers.

Flavor is a powerful magnet for attracting shoppers to meat and poultry snacks. 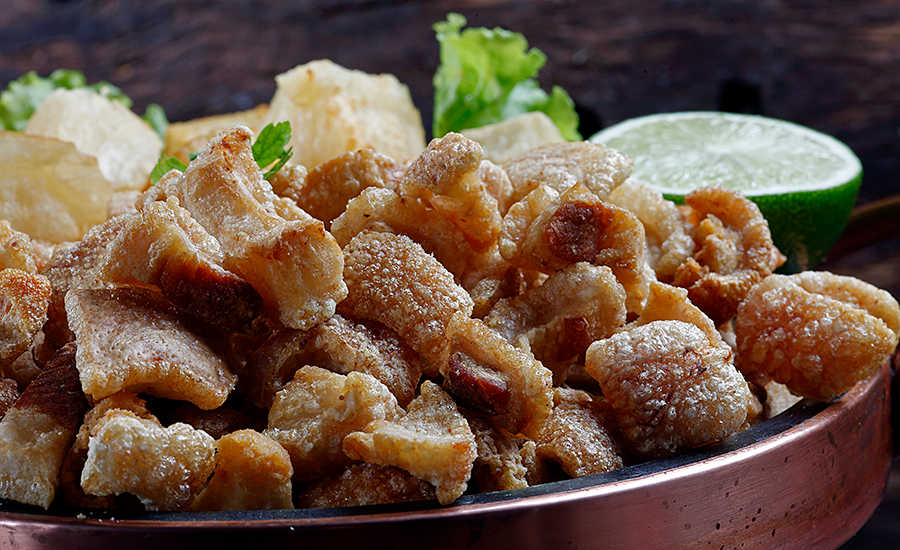 The growth of both mature and less mainstream categories suggests “that a little flavor innovation can go a long way for both legacy and newcomers,” reports Mintel Group, a Chicago-based global market research firm.

“Consumers base their snack choices on flavor first, followed by other key choice factors such as price, naturalness, nutrition and brand,” Mintel states in its February 2020 Trending Flavors and Ingredients in Snacks U.S. report. “Mainstream flavor and ingredient innovation must be unique to appeal to mass audiences, but not so unique it’s alienating.”

“Because snacks have to taste good and offer appealing flavor varieties, snack players will do well to hammer home the message of good taste and enjoyment,” Mintel reports. In fact,79 percent of respondents in a November 2018 Mintel survey of 1,899 Internet users ages 18 and older agreed flavor is more important than brand when choosing a snack, and 52 percent noted taste is more important than health when eating snacks.

“While a large contingency of snackers wish there were more healthy snack options, slightly more than half say taste trumps health,” Mintel reports. “The solution is a mix of both health and indulgence, and all signs point to flavor being the catalyst to bridge the gap between the two.”

Mintel adds that while consumers enjoy the flavors they know and love, “snack brands can keep things interesting with new flavor combinations and new spins on classics. While classic flavors such as barbecue, salt, garlic, ranch and jalapeño dominate consumers’ current flavor repertoire, snackers express the highest interest in next-level herbal, vegetable and spicy flavors such as basil, avocado and sweet chili that carry fresh and real ingredient perception.”

Changing shopper habits hold down potential for meat snack activity. In the age of COVID-19, consumers are making fewer shopping trips, which results in decreased traffic in stores’ snack areas, Roerink says. In response, retailers should make meat snacks more visible to the consumers that are visiting retail outlets by placing secondary meat snack layouts in areas throughout the store to drive impulse purchases.

Other effective merchandising techniques include using social and digital media to spotlight varieties, pricing and the scope of meat snacks, and by placing products with similar attributes together in snack sections, such as those that are higher in protein or gluten free, to make it easier for shoppers to find what they’re looking for, Lyons Wyatt says.

The effect of snacking and convenience on meat and poultry packaging