Freezing and chilling technologies: Get sold on the cold

Leveraging the best freezing and chilling technologies can enable meat and poultry processors to enhance operations, but equipment capabilities must keep pace with expanding volumes for maximum benefit.

Keeping meat and poultry fresh and safe during its journey from the ranch to the plate is often an intricate undertaking for processors. And few variables are as important for sustaining product quality as leveraging appropriate freezing and chilling technologies.

“The rate of chilling and freezing can significantly impact meat condition,” says Robert Delmore, a professor in the Department of Animal Sciences at Colorado State University, in Fort Collins. “Chilling carcasses too rapidly before the carcass enters rigor mortis can result in cold shortening, causing tough meat. Conversely, freezing meat too slowly results in large ice crystal formation that causes an increase in purge when thawing.”

Purge occurs when the sharp edges of the crystals poke into muscle cells that contain water and release cellular fluids, says Jeff Sindelar, professor and extension meat specialist in the Department of Animal Sciences at the University of Wisconsin, in Madison. “It is vital to freeze rapidly while freezing to an endpoint temperature that minimizes quality changes when storing products for extended periods,” he says.

The ideal scenario is to freeze meat and poultry as quickly as possible and thaw the proteins as slowly as feasible in order to best preserve the products, says Norman Marriott, emeritus professor in the College of Agriculture and Life Sciences at Virginia Polytechnic Institute and State University (Virginia Tech), in Blacksburg. “Meat cuts will eventually deteriorate if not frozen, even if there is refrigeration,” he says.

Freezing should occur immediately after product manufacturing and packaging, Marriott says. He notes most high-volume operators use freezing tunnels or spiral freezers that often perform the task in 15 to 45 minutes, with times varying by product and technology.

How low can you go?

The most effective systems will enable processors to increase product throughput and avoid potential bottlenecks, while also improving meat and poultry quality and safety, Sindelar says.

“Meat is a biological medium and, as with all things biological, changes happen and not normally for the better,” he says. “Optimizing freezing and chilling can minimize the biochemically based negative changes while maintaining freshness or maximizing quality.”

Reaching the optimal freeze point also is essential for sustaining quality, Sindelar says. He notes that meat, which is 78 percent water, begins to freeze at 28 degrees Fahrenheit because additives such as salt, sugar and spices, in conjunction with a cut’s protein, minerals, iron and enzymes, lower the freezing point and only about half the water in meat is completely frozen at 28 degrees.

“Freezing continues until the temperature is well below zero degrees Fahrenheit,” Sindelar says. “Enzymes can still be active in the portions that are not frozen and may slowly degrade the fat and protein, causing quality deterioration. It is important to freeze meat to the point where water is no longer mobile.”

He adds that while water in meat completely freezes or demobilizes at minus 65 degrees Fahrenheit, few processors go that low because of cost issues. 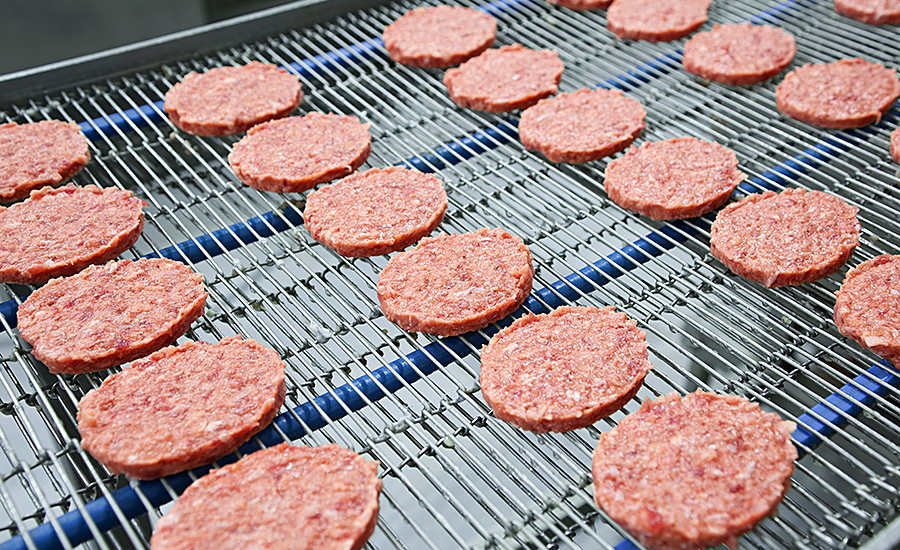 The future is now

To achieve maximum freezing and chilling efficiencies, processors must use equipment that has the necessary British thermal units (BTUs) to process at the intended rate, says John Macy, professor and poultry processing specialist at the Center of Excellence for Poultry Science at the Little Rock-based University of Arkansas System Division of Agriculture. A BTU is the amount of heat required to raise the temperature of water by 1 degree Fahrenheit.

“Determining the necessary BTUs requires an engineering calculation in accordance with how many pounds are coming into the processing line,” he says. “Because processors always want to go faster and get the chilling and freezing done quicker to have more volume run through their plants, they can never have enough BTUs.”

Marcy adds that many processors rarely consider future requirements when implementing freezing and chilling technologies. That lack of forethought will hinder ongoing operations because “the future will come quicker than you might think.”

Still, he cautions, “There are no easy answers regarding equipment selection.” Systems will differ in accordance with the protein to be chilled and the BTUs needed to get it frozen.

“But because processors can only handle so many pounds and remove so much heat before they run out of BTUs, problems from expanding meat inventories are likely to result,” Marcy says. “There is only so much available capacity.”

In response, operators should implement systems that can support both their current processing volumes and the amounts that are likely to require freezing and chilling in coming years, he says. “It is a simple calculation and important as processors generally overrun systems quickly because the equipment can’t manage the greater volume pushes.”

Because chilling and freezing equipment is a huge capital investment, “many company bean counters don’t want to spend more money than is absolutely necessary at the time,” he says. “Processors usually push the equipment past the breaking point and experience a shortage of BTUs before realizing they have to bite the bullet and invest in more equipment.”

Another common mistake is not ensuring the equipment will freeze or chill as fast or as well as possible, Marriott says. “It is important to rapidly pull the body heat swiftly from carcasses to prevent the frozen crust that will trap heat inside from forming,” he says.

When analyzing potential technologies, processors need to focus on the rate of heat removal, Sindelar says. “Operators should further understand the fundamental aspects of freezing and heat mass transfer and how such elements can vary among technologies,” he says. “Not considering or knowing the impact of endpoint temperatures to the overall process may be costly.”

Processors also should remember that you do get what you pay for, Marriott says. The more expensive and effective freezing equipment often uses carbon dioxide and nitrogen. “It requires a higher volume operation to justify the cost, but it does enhance product acceptability,” he says.

In addition to the importance of price, size and operating efficiencies, it is crucial that the equipment can be cleaned easily, Delmore says, which is necessary to “prevent poor functionality and maximize sanitation in the processing room.”

Processors also should think about protein type and size, Marriott says. “Because a chicken or turkey carcass can weigh a couple of pounds while a beef carcass might weigh more than 1,000, using the same machinery for all the different products is not practical,” he says.

Do your due diligence

Poultry technology alternatives, meanwhile, can differ in accordance with the packaging in use, Marcy says. “Straight blast freezers work best for non-exposed selections, which could include bagged or boxed items, and there is little worry about cleanliness when using the technology,” he says. “It is just a matter of considering air flow and economics.”

While blast freezers might only require the removal of frost twice a year, spiral freezers have more stringent sanitation requirements, he says.

Poultry volumes also should dictate technology choices, Marcy says. “Knowing how many pounds of poultry that processors will want to freeze in a day determines how many pounds per hour they need to get through the line and the amounts of BTUs they will need,” he says. “Volume is everything.”

Delmore says a major concern “is asking a chilling system to do more work than it is designed to accomplish. You cannot just keep putting additional meat into a system and expect the best results.” He says operators should work with refrigeration engineers to calculate the necessary temperatures and rates of reduction.

To pinpoint the optimal options for their specific situations, processors can solicit input from equipment vendors and the mechanical and industrial engineers that work in higher-volume plants, Marriott says.

Larger processors also can seek bids for custom-made solutions, he says. “There is a tendency for vendors to just sell what they routinely manufacture, but the prospect of garnering multiple purchases from larger processors might make them more flexible in their designs,” Marriott says.

While the best freezing and chilling equipment will differ from product to product and plant to plant, “the goals for using the technologies are the same, which includes freezing quickly and to the most important temperature for achieving quality, safety and process flow,” Sindelar says. NP