This website requires certain cookies to work and uses other cookies to help you have the best experience. By visiting this website, certain cookies have already been set, which you may delete and block. By closing this message or continuing to use our site, you agree to the use of cookies. Visit our updated privacy and cookie policy to learn more.
Home » Safeway Rancher’s Reserve beef donates mobile grilling trailer to All American Beef Battalion
Meat and Poultry Industry NewsBeef 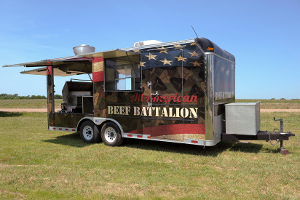 Honoring more United States military personnel with steak dinners is now possible with a major donation from Safeway’s Rancher’s Reserve beef brand to the All American Beef Battalion, a Dodge City, Kan.-based nonprofit volunteer group that works to provide 18- to 20-ounce rib eye steak dinners to American service members and their families.  Cargill is a major supplier to Safeway for its Ranchers Reserve beef.

Safeway is donating a large mobile grilling unit valued at approximately $50,000, which contains nearly 1,800-cubic-feet of grilling space on wheels.  The trailer is self-sufficient and can simultaneously grill approximately 60 steaks.  From the kitchen prep space to the serving area, this mobile grilling unit includes everything required to serve rib eye steaks to thousands of military personnel and their families.

For his achievements in support of U.S. military personnel, Bill Broadie, founder of the Battalion, was recognized at the recent National Cattlemen’s Beef Association (NCBA) convention.  There, Safeway staff members took note of Broadie and began the relationship. Additionally, BEEF magazine named Broadie its 2012 Trailblazer Award recipient for creating the All American Beef Battalion.

Broadie’s passion for the beef industry, in addition to his experience as a member of the U.S. Marine Corps., inspired him to form the battalion.  “I’ve been in the beef industry my entire life and I’m now 65,” said Broadie.  “America has some of the greatest beef products in the world, and thanking our brave troops by providing steak dinners is a way to give them a little something back for their service to our nation.”

The grilling unit sports a new and patriotic graphic wrap that reflects the Battalion’s dedication to America’s troops and for providing them with delicious, tender, nutritious steak dinners.  The trailer will make its debut June 21 at Walter Reed Medical Center, and be featured at the 2013 Safeway Barbecue Battle in Washington, D.C.

"Safeway takes great pride in providing nutritious food to our customers and nurturing the lives of our neighbors,” said Jim Sheeran, vice president, corporate meat merchandising for Safeway.  “By donating a mobile grilling unit, nutritious steak dinners will now be provided to even more of those who protect and serve our country.”

Since 2008, the Battalion has served steak dinners to approximately 170,000 military service members and their families.  The Battalion consists of a core group of volunteer, primarily military veterans, from Kansas, and also includes volunteers from Texas, Oklahoma and Colorado.

“One hundred percent of the money the All American Beef Battalion receives goes to our mission of providing steaks to our military personnel and their families,” explained Broadie. “The donation of this mobile grilling unit is a tremendous boost to our cause, making it easier to prepare and serve food to more troops while attracting more volunteers and support.”

For more information about the Battalion, visit steakfortroops.com.

Rancho Recall leaves rancher Bill Niman with 100,000 pounds of inspected beef to be thrown away